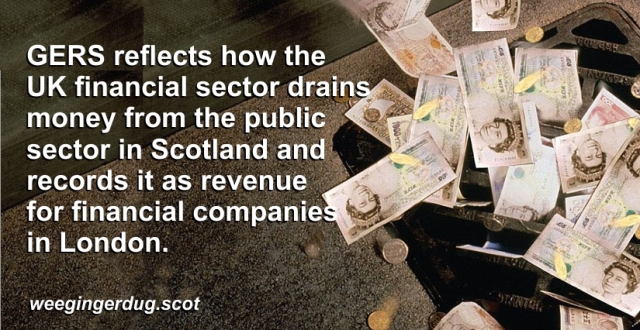 Yesterday was GERS day, and as was entirely predictable it produced the usual cringefest of anti-independence campaigners gloating about how poor Scotland supposedly is. The “news” that Scotland is supposedly responsible for over half of the UK’s annual deficit was gleefully leapt upon by anti-independence politicians who were all over social media like a cringing rash. However it’s utter nonsense, and is nothing more than an artifact of the way that the GERS figures are constructed. They were deliberately constructed that way in order to paint Scotland in as poor a financial light as possible and to reinforce the claim that the wealth of the UK is produced by the financial sector in London. GERS wants us to believe that Scotland is a beggar at the table of a City of London bankers’ banquet.

This claim is the product of a simple accounting trick, a trick which is so transparent that even the Scottish media ought to be able to see through it. The fact that they don’t tells you that they have chosen not to, because it suits the interests of the anti-independence establishment that you don’t know how it really works.

Let’s explain how it works with a simple hypothetical example. For the purposes of this explanation, let’s use some invented figures in order to keep things simple, and let’s also suppose that the UK is split into four areas for the purposes of government revenue and expenditure. These figures and the areas may be fictional, but they illustrate how GERS works and how it acts as a political tool to artificially inflate the apparent deficit reported for Scotland.

However what GERS does is to compare Area D, which in this example represents Scotland, with the the UK as a whole. Once we extract Area D, the rest of the UK now has a deficit of £25, because now we are only totalling up the deficits from Areas B and C and subtracting them from the surplus reported for Area A. Areas B and C have a total deficit of 125, subtracted from Area A’s surplus of 100, that gives us a deficit for A, B, and C together of £25.

So GERS would have us believe that with its deficit of £50, Scotland is responsible for two thirds of the total UK deficit of £75. GERS tells us that Scotland is responsible for two thirds of the deficit even though there is another area of the UK, Area B, which has a higher annual deficit than Scotland does, and Area C has the exact same deficit as Scotland does. It’s an accounting trick, and it’s one of the reasons why GERS was introduced as a political tool to use against those of us who argue for greater Scottish self-government.

Yet GERS is even worse than this example suggests, because in this example we are assuming that Area A’s surplus of £100 really is produced by Area A. With GERS, that’s not an assumption that we can safely make. In the UK, the surplus generated by London and the South East is not necessarily really generated by that region, even though it is apportioned to that region in the government’s financial statistics.

GERS claims that it makes a due allowance for the economic activity carried out by UK-wide businesses in Scotland, although the political economist Richard Murphy points out that the data to do this simply doesn’t exist. However there is a greater issue, the UK’s bloated financial sector, based in London, syphons off huge amounts of money from the rest of the UK and records it as revenue from London. The “financialisation” of the UK economy has increased greatly over the past decades, as Private Finance Initiatives have spread across the land like a bloodsucking blight.

In just one example, the Police Training Centre in East Kilbride will result in a cash stream of £111 million over the 26 years of the financing life of the project going to the financial company delivering a project which the public were told was only going to cost £27 million. This £111 million will be recorded as Scottish expenditure, but as London revenue. Had the government built this training centre using more conventional means, it would only have cost around £30 to £50 million. Instead the final cost will be well north of £100 million. That’s why PFI is described as “one hospital for the price of two.” For more detail on how this really works, to the great detriment of Scotland and everywhere else in the UK outside the City of London, see here – https://www.taxresearch.org.uk/Blog/2019/08/16/the-burden-of-financialisation-a-case-study-of-a-scottish-police-training-centre/

This massive growth the payments due because of the PFI initiatives so beloved of Tony Blair and Gordon Brown and successive Conservative governments is one of the main factors that has caused the ballooning of the Scottish deficit over the past decade. The result is that Scotland and the rest of the UK is told that it has a massive deficit, while London reports a surplus and Westminster governments insist that this means that we are all dependent on the goodwill and charity of the financial sector in the City of London and must all bow down before them.

So the next time Gordie Broon broontervenes and tells us that Scotland depends on pooling and sharing with the rest of the UK, remember that what he’s caused is that the income is shared with London, but the costs with Scotland. Of course the GERS figures don’t reflect any of this. That’s just the UK unitary market working normally. Which is precisely why we need independence, because the UK unitary market is designed to suck money out of the public sector in rest of the UK, and deposit it in the bank accounts of the wealthy.