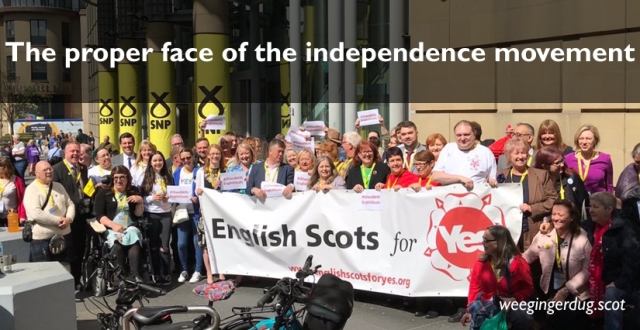 There’s been an outbreak of pearl clutching in the British nationalist press in Scotland over the past few days. Not because David Mundell and Ruth Davidson have unilaterally ripped up the Scottish Claim of Right and taken it upon themselves to rewrite the political understanding of Scotland’s place within the UK. They’re perfectly fine with that. No, what’s got them worked up into a frothing lather is an off the cuff comment from a former SNP MSP about Scotland’s “proper languages”, and a sign held up outside the SNP conference by a pair of extremists who have no influence or support within the wider independence movement.

This is, let us not forget, the same British nationalist media which is constantly accusing the SNP of grievance mongering. And to be fair they must know what grievance mongering is, because they’re always doing it themselves. In fact they put the SNP and everyone else in Scotland to shame.

Let’s start with Sean Clerkin’s sign. Sean is a well known fringe figure in the Scottish independence movement who is most notable for his ability to annoy people and to be counter-productive. He has now, by all accounts, even fallen out with the Scottish Resistance, that fringe group which specialises in annoying people and being counter-productive. Sean and one of his pals stood on the pavement outside the SNP conference in Edinburgh last weekend bearing a sign saying “England get out of Scotland”. This came as a surprise to most of us with even a basic grasp of geography, who understand that England isn’t in Scotland. However Sean’s banner was widely perceived as being an expression of anti-English racism. It should be pointed out here that Scottish Resistance disavowed the banner too.

The banner and its message had no more to do with the SNP and had no more support amongst the wider indepenence movement than did the other individuals standing on the pavement alongside Sean, who were carrying placards telling us that the End Is Nigh – and they weren’t referring to Westminster rule in Scotland or even the climate emergency. However that didn’t stop the banner being widely cited on social media as yet another example of how vile and anti-English the entire independence movement is.

What the media wasn’t so keen to publicise was the response from the SNP and the wider independence movement to Sean’s banner, which was to stand in front of it, blocking the sight of it with a banner from English Scots for Yes and standing in solidarity with English people who have chosen to make their lives in Scotland. They didn’t mention the delegates and SNP members who came out to show their solidarity with English Scots. That was the proper independence movement in action, but it was Sean’s banner that got the media attention.

Once again, the entire independence movement is judged, convicted, and condemned by the behaviour of an fringe individual who is disavowed by the vast majority and has no place in the mainstream. Yet those same British nationalists who do the condemning react with fury if you suggest that opponents of independence take responsibility for the real fascists, racists, islamophobes, anti-semites, and sectarian bigots who infest the ranks of unionism in far larger numbers. How very dare you imply that those creatures have anything to do with them. But that’s precisely what they do to supporters of independence.

At the launch of Voices for Scotland, Dave Thomson who was formerly an SNP MSP for the Highlands, spoke in Gaelic and Scots and then apologised to “those who do not have the two proper languages of Scotland.” Cue an outbreak of harrumphery, humbug, and claims of victimisation from the British nationalist media. Because, as we all know, the most discriminated against people in all of Scotland are white heterosexual middle class English speaking monoglots who think Ruth Davidson is doing a terribly good job. Help help, we’re being oppressed for our BBC weather announcer accents.

Actually Dave was correct, at least in one definition of the word proper. The word proper has a number of definitions, one of which is “belonging or relating exclusively or distinctively to; particular to”. So for example you can say that the elephants with the big ears are proper to Africa, even though the elephant in front of you is in Edinburgh zoo. Likewise cruel and heartless tyrants who defend the rape clause are proper to the Conservative party.

In one important sense, Gaelic and Scots are Scotland’s proper languages. They are exclusively or distinctively Scottish in a way that English is not. Outwith Scotland, Gaelic and Scots are used only by communities which are of Scottish origin. English is a world language used by millions of people all over the globe, the vast majority of whom have no connections with Scotland of any description. If you hear someone speaking Gaelic or Scots, you can be confident that it is a virtual certainty that person is either Scottish or has a close association with Scotland. A person speaking English can potentially come from any one of dozens of countries across the globe.

However the media chose to focus on another definition, “genuine or real”. A definition which, interestingly enough, is according to several dictionaries proper only to British English and isn’t characteristic of other varieties of the language. See what I did there? They then took Dave’s words to imply that English wasn’t a “proper” language of Scotland in the sense that he was saying that English isn’t really a Scottish language and by extension those who speak only English aren’t really Scots. Which wasn’t what he said at all. But hey, anything to manufacture a grievance and tar the entire independence movement with the slur of anti-English racism.

In order to ensure that there is no doubt for any British nationalists in search of something to feel victimised by – which would be their specialist subject on Mastermind – of course English is a genuine, real, and authentic language of Scotland, and of course people in Scotland who speak only English are real, authentic, and genuine Scots. English is one of Scotland’s three national languages, and the only one which is current outwith Scotland as well as within it. There is even a distinctively Scottish variety of standard English which is well described in the linguistics literature. Scottish Standard English is proper to Scotland in the exclusive sense of the word proper.

There is an immense quantity of Scottish literature in English, a vast quantity of historical documentation. You cannot understand modern Scotland without understanding English. It shouldn’t need to be repeated and emphasised that of course English is a national language of Scotland and that those who use it are just as Scottish as Scots speakers or Gaelic speakers, but then we shouldn’t really need to keep stating the obvious because the press in this country is mendacious. But that’s where we are.

I wouldn’t mind the accusations from the British nationalist press, nor the hand-wringing opinion pieces from certain independence supporters which always follow in the wake of such incidents, if there was a similar focus on the behaviour and comments of opponents of independence and an equal willingness to hold the mainstream of opposition to independence to account for the vile elements on its extreme. Those anguished articles telling us to get our house in order, written by independence supporters and published in the anti-independence press, may by themselves make reasonable points and be well-intentioned, but they reinforce the perception that it’s only one side of Scotland’s constitutional debate which has a problem.

Problems of extremism, of bad behaviour, of fringe individuals with reprehensible views, are not confined to the independence movement. They exist in greater numbers amongst opponents of independence. Thousands march in support of the sectarianism of the Orange Order, and the Conservative party says nothing. The best that some anti-English racist group could manage would be a handful of people, and they would certainly be condemned by the SNP and the mainstream independence movement.

However instead we get a blatant double standard, we are led to believe that it’s the SNP, the Greens, and the independence movement as a whole which must take action to counter the extremists on the fringes of the movement, but opponents of independence need to take no responsibility whatsover for the Orange Order, Tommy Robinson, Ukip, Britain First, Nazi salute dog guy, or the myriad of other grotesques who infest the extremes of British nationalism.

So yes, we must condemn, disavow, and disassociate ourselves from political extremists, from racism, from bigotry. But’s let’s talk properly about it. And that means that opponents of independence must get their own house in order if they want to condemn us.