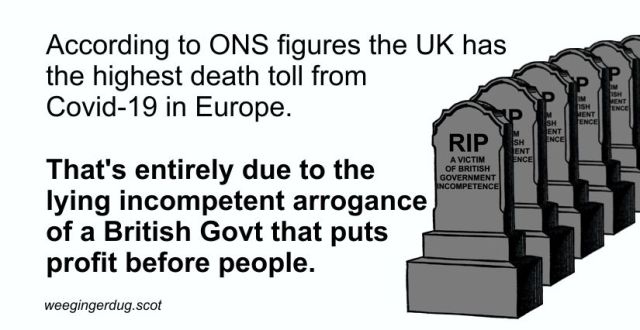 The UK is now the leader in Europe. Unfortunately it’s a leader in a way that isn’t going to gladden the cockles of even the most deluded British nationalist’s heart, because the UK now has the highest total number of recorded deaths from Covid-19 of anywhere in Europe and has exceeded the death toll in Italy, until now the worst affected country in Europe. According to new figures from the UK Government’s own Office of National Statistics, by May 2 there had been 29,648 registered deaths in England and Wales where Covid-19 was mentioned on the death certificate. Together with reported deaths from Scotland and Northern Ireland, this takes the total in the UK to 32,375. This figure is over 3000 greater than Italy’s total of 29,029 and we’re not out of the woods yet. It’s a leader table to weep over, literally.

This was of course the lead story that was being tweeted by BBC news this morning. Oh wait. No. The BBC thought it far more important to let us know that there was a lovely photo of a cheerful Boris Johnson in a sunny Regent’s Park, and the heart warming tale of a hand made card sent to him from a small child. Because that’s what’s really important here. We don’t really have the highest death toll in Europe, because we’ve left Europe. It’s just a shame that the British media didn’t warn us that those Brexity sunlit uplands were strewn with corpses, and now that we see that they are it’s simply unpatriotic to hold the British Government to account for it.

We are witnessing this death toll because the British Government failed in a number of vital respects. Despite having early warning from the situation Italy that an epidemic was on its way the British Government was confused in its early response to the crisis, seemingly believing that this could be dealt with in the similar way to a flu outbreak. It was reluctant to impose a lockdown because it was more concerned about the effects on business than the toll in people’s lives, and it pursued a deadly herd immunity strategy which allowed the virus to become widely established across the UK. As other European countries went into lockdown, the UK allowed thousands to gather at the Cheltenham races.

Even now at this late stage the British Government has still not implemented testing, contact tracing, and isolation – the strategy which has been successful in other countries. There is still no system in place to test travellers arriving in the UK from abroad and to quarantine them. There have been entirely avoidable shortages in PPE, and these shortages may very well have contributed to the deaths of key workers. Measures to protect staff and residents in care homes, who are those at greatest risk from this disease, have been woefully inadequate despite the fact that in any herd immunity policy this is precisely the group which is in need of the greatest protection.

But now dividing lines supposedly existing between the cheerleaders for British nationalism in the media and the British Government has become even more blurred into a sick symbiosis. The UK government website has republished in full an article from the Daily Mail – yes, the actual Daily Seig Heil – penned by the Governor General Alister Jack about the importance of the entire UK coming out of lockdown together. https://www.gov.uk/government/news/leaving-lockdown-in-lockstep
We’ve gone through the mirror now, into a dark dystopia where opinion pieces from the Daily Mail attacking the political opponents of the Conservatives are published on the website of the British Government in a deliberate attempt to undermine the Scottish Government and where the British Government sees its job as being to promote the Daily Mail. Tomorrow on the official website of the British Government there will be a piece originally published in the Express, telling us that the ghost of Princess Di has full confidence in Boris Johnson. If what Alister Jack has done is using public resources and civil servants for party political purposes, it’s hard to see what would be. It’s a clear breach of the ministerial code.

Alister wants us natives to know that it’s to be the Union at any cost, including our lives. Big Rumpled Father in Downing Street speak’um to natives, tell’um to do what they are told. And he’s not even got the decency to offer us any beads and mirrors. There are however some blankets, infected with coronavirus. Scotland will do what’s good for London. That’s the British way. The so-called Union is more precious to Alister than the right of the Scottish Government to use the mandate given to it by the people of Scotland to take decisions in the best interests of Scotland. The so-called Union is more important to Alister than Scottish lives. If protecting the British state from vile separatists means allowing some Scottish people to die unnecessarily from a disease, so be it.

The Scottish Government has said that it’s striving to keep party politics and constitutional politics out of its response to the coronavirus epidemic. And that’s right and proper at a time of national crisis when Scotland is coping with a lethal disease. But the British nationalists who occupy the British state have no intention at all of behaving in the same way.

It doesn’t matter to Alister if the scientific advice is for Scotland to remain in lockdown, if the British Government listens to its right wing frothers and decides to prioritise the economy then Scotland jolly well ought to do as it’s told even if the scientific advisors to the Scottish Government say that it’s not wise. Wisdom eh. That’s a word that you’ll only see in the same sentence as Alister Jack when there’s a negative in there. Alister’s government has presided over the highest death toll in Europe. It remains mired in confusion. It tries to keep its scientific advice secret and as we’ve now discovered that’s because its advisors include political appointees. This is not a government which has any moral right to lecture anyone, but it’s far too morally bankrupt to realise that.

Every day that passes during this crisis merely reinforces the reasons why Scotland desperately needs to self-isolate from the toxic arrogance of British nationalism that costs lives and destroys hope. The death toll in the UK is now the highest in Europe, and that’s entirely down to lying incompetent arrogance of a British Government which puts profit before people and a British state which is incapable of reforming itself. And it’s this sorry bunch of lethally incompetent arrogant charlatans that Alister Jack wants Scotland to take its lead from.

And finally, because we could all do with some cheering up during these difficult times…

89 comments on “The lethally incompetent arrogance of the Tories”