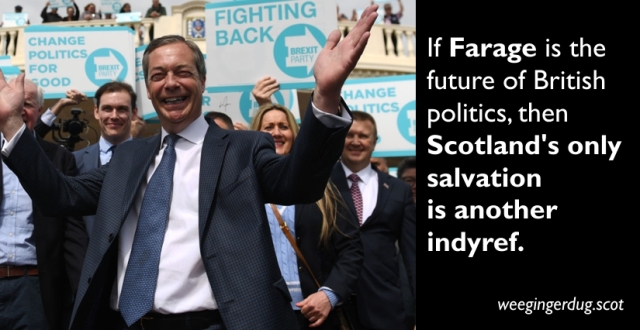 The European elections have shown conclusively that Scotland is in a very different political place from the rest of the UK. Where the story of the night for England and Wales was the inexorable rise of the gurning face of Faragism, Scotland proved itself resistant to his dubious charms and returned a decisive vote in favour of a second EU referendum. In every local authority area in Scotland, a pro-EU referendum party topped the poll. The SNP won everywhere, except Orkney and Shetland which narrowly preferred the Lib Dems, and ended up with three out of Scotland’s six seats in the European parliament. It’s worth pointing out at this juncture that independent EU nations with a similar population size as Scotland, like Denmark or Finland, have 13 each. It’s yet another UK benefit that Scotland gets to be underrepresented in Europe.

62% of Scottish voters opted for parties which unambiguously want another EU referendum – the SNP, Greens, Lib Dems, and Change UK. Only 28.2% supported parties which are unequivocally in favour of Brexit – the Brexit party, the Tories, and Ukip. Then another 9.3% voted for Labour, and no one knows what they want, least of all the Labour party. It’s a fairly safe bet that many of the rump of voters who remained loyal to Labour in Scotland are also in favour of another EU referendum, so the 62% who voted for parties overtly calling for another EU referendum represents the absolute minimum of Scottish support for revisiting the EU question, it’s really higher than that. The question now is how those voters who opted for anti-independence parties supporting another EU referendum will react if Scotland is indeed taken out of the EU without the matter being put back to the people. They’ll have a very strong incentive to support another independence referendum, and to vote yes in it, as the only way of rescuing EU membership for Scotland.

Despite Scotland very clearly and unequivocally saying that it wants another say on Brexit, none of the Conservative leadership candidates seem disposed to offer one. The front runners are now vying with one another to out-Farage Nigel Farage, to offer the most hardline Brexit possible. The Tories went down to their worse defeat in British politics in modern times, managing just 9% across the UK, dropping to fifth place in the polls. They didn’t do much better in Scotland, where they could console themselves with the cold comfort that at least they didn’t do as badly as the Labour party.

Ruth’s fantasy of becoming the next First Minister is now as dead as her party’s reputation for strong and stable government. It’s difficult to see how her party’s fortunes can recover in Scotland, tied as they are to a Westminster party which is hell bent on delivering something that the Scottish electorate has so resoundingly rejected. This election has only highlighted the gulf between the political directions of Scotland and England. No number of cheeky photo-ops can plaster over it.

You might think that Ruth “A Vote for Me Is a Vote for a Voice for Scotland Within the UK” Davidson would be entreating with the Tory leadership candidates to ensure that they take into account the sensibilities and wishes of a Scotland which has just given her party a kicking. You would of course only be thinking that if you lived in the cave next door to the one where Ruth goes to hide whenever she’s avoiding speaking to the press because there’s some bad news for her party. When it comes to a choice between her own career, or protecting Scotland’s interests, Ruth’s careerist instincts win every time.

Naturally Ruth isn’t trying to intercede with her party to ensure that Brexit is as soft as possible and does the least amount of damage to Scotland. Instead Ruth is asking all the Tory leadership candidates to rule out consenting to a Section 30 order to authorise another independence referendum, and telling the rest of us to suck up Brexit because it’s what the UK voted for. She’s the politician who see her role as being to close down democratic options for her country.

The UK was politically unstable and uncertain last week. It’s even more so now. The Conservative party is now in full on panic mode as it digests the devastation wreaked upon its electoral support. Their MPs will certainly not be in any mood for an early General Election right now. Turkeys don’t vote for Christmas. That said, British politics are so volatile that anything might happen. Funny that, considering that back in 2014 Scotland was told that the only volatile thing it needed to worry about was the oil price per barrel.

Whoever succeeds as Tory leader will enjoy a honeymoon period, but it won’t last long. The same divisions, the same Parliamentary arithmetic, and the same looming deadline of October 31 will destroy it very quickly. But with the Faragistas breathing down their necks, the Tories are going to be even more motivated than they were before to allow the UK to crash out of the EU at the end of October without a deal, and bugger the consequences.

All that can be said for certain is that this UK is not the beacon of political and economic stability that was sold to Scotland in 2014. It is highly unlikely that this Westminster Parliament is going to permit a public say on Brexit, which means that all that is left for Scotland is another independence referendum. This week the Scottish Government introduces the legislation to prepare the way for another independence vote and the Scottish Parliament must make clear that a Westminster refusal to consent to a Section 30 order is not an option if Westminster wishes to preserve the notion that the UK is indeed a union of nations.

The EU elections proved that Scotland wants a different path to the only one on offer within the UK. If the gurning influence of Nigel Farage is the defining shape of the future of British politics, then another independence referendum is Scotland’s only hope of salvation. It’s high time that we took it. The UK can’t save Scotland. Scotland can only save itself.

27 comments on “The only hope of salvation”