The starting pistol has been fired, and we’re into a referendum campaign in which the English right which campaigned so viciously to keep Scotland a part of the UK will complain bitterly that the UK needs to leave the EU because the EU treats the UK like the UK treats Scotland. They complain that Europe ignores the UK while they ignore Scotland. The UK right wing media is preparing to rerun WW2, or at least an entire series of Dad’s Army, with front pages proclaiming that Britain must be saved using iconography that means England.

For the next four months we’ll be subjected to a barrage of made up shit from both sides. The remain campaign will mount a fear campaign that will make Scotland’s Project Fear seem like Carry On Frankenstein, while the leave campaign will make up any old nonsense that can appear in the pages of the Mail, the Express, or the Telegraph – so pretty much business as usual for them then. In an appeal to those English voters who are convinced that they’re paying for Scottish prescriptions, the Telegraph has published a story claiming that Nicola Sturgeon has said that Scotland should declare independence if Britain votes to leave. What she actually said was that it would “be best for Scotland to be in the EU as an independent member state”.

The Tory outers are making their positions known. There are things, said Tory minister Chris Grayling, that this country could and should be doing but that we simply cannot do – because another government won’t let us. That would be the same Chris Grayling who piloted the EVEL vote through the Commons which ensured that Scottish MPs are second class in the UK parliament.

Scots Tory carpetbagger Michael Gove, who had to run off to the leafy suburbs of southern England in order to find anyone who’d vote for him because his style of politics is as popular in Scotland as cholera, has stated he’s in favour of leaving. In a statement to a fawning press Gove said that his starting point in reaching a decision was simple. He thinks that “the decisions which govern all our lives, the laws we must all obey and the taxes we must all pay should be decided by people we choose and who we can throw out if we want change.”

This would be the same Michael Gove who’s a member of a government which determines Scotland’s future, which tells Scotland when it’s going to war, which sets Scotland’s taxes and its overall budget, but which Scotland can’t vote out of office. Scotland could be dragged out of the EU against its will and that would be just fine and dandy with the man who says he thinks that the decisions which govern our lives must be decided by people we choose. But only some people, and some decisions. If Scotland is nice and well behaved we’ll still get to decide on road signs while Gove’s Tory party wrecks our lives and destroys our public services.

Boris Johnson has been playing hard to get. For once the man whose entire political career is an edifice of carefully constructed buffoonery is determined to wring as much publicity as possible out of not saying anything. He fancies his chances of becoming prime minister on the back of having a prominent role in a successful out campaign, but he’s currently the mayor of a city which is the most pro-EU part of England and which depends on EU membership for its financial well being. Boris is torn between his careerism and his self-interest, which is the closest to political principles that he’s ever going to get.

In another example of Scotland, and Wales and Northern Ireland, being ignored by the UK Government, the date for the referendum has been set as the 23rd of June. This is despite the fact that the leaders of all the devolved administrations in the UK asked the UK government to delay the referendum so that EU campaigning would not dominate the media agenda during Scottish, Welsh and Northern Irish elections. This being the same UK Government that refuses to allow Scotland, Wales or Northern Ireland to have control over their own broadcast media.

Davie didn’t give a toss, and now coverage of the Scottish Parliamentary elections will be swamped in our Londoncentric media by coverage of the EU vote a few weeks later. It’s already started, on the BBC news today absolutely nothing happened anywhere else in the world, and nothing happened in the UK that wasn’t about Davie’s referendum. The Scottish Parliament election campaign will now be dominated by Goves and Graylings, by Boris and Nigel. So now we can look forward to Scotland getting its first UKIP MSPs on the back of a UK media farrago of faragists. We can thank the pork puller for that. Now for the next five years we’ll be faced with some sub-Coburn mouth breathers in the Scottish Parliament and the right wing Scottish media pointing to their existence as proof that Scots really aren’t left wing and don’t really have a distinctive politics after all.

Meanwhile on the staying in side, who are telling us that the UK must remain a part of the EU in order to protect and create job opportunities, the new chief of the official remain campaign has been named as Will Straw, who failed in his bid to become elected as a Labour MP at the last General Election. That’s the Will Straw whose main qualification for the job is that he’s the son of Britain’s second most infamous war criminal and cash for access facilitator, Jack Straw. Whether it’s in the EU or out of it, for the UK establishment it’s all about patronage, privilege and jobs for the girls and boys. The appointment of Will Straw is the kind of thing that makes you wish that both sides in the debate could lose.

By this time you can probably detect the emerging theme of the EU referendum campaign, and that theme is stomach churning rank hypocrisy. It’s another UK decision where Scotland’s voice doesn’t count, where we’ll get presented with a fait accompli from voters down south and have to deal with the consequences. Even if every single voter in Scotland votes to remain in the EU, if England votes to leave that’s what will be foisted on us.

This is the punching above our weight that Better Together promised when they told us that they only way Scotland could remain in the EU would be to vote No in the independence referendum. We get to be pedestrians run over in the car crash of our own politics. We get to have the agenda of Scottish politics determined by other people in other places who have no real interest in us – we’re just a jokey extension to the north, an exporter of jokes about bad diets and subsidy junkies. Now all those trolls from south of the border who demanded their say in Scotland’s independence referendum can have it. If they vote for the UK to leave the EU, they’re also voting for Scotland to leave the UK.

For the next four months Scottish politics will be dominated by a question that none of Scotland’s main political parties are interested in, that most of Scotland’s voters consider long settled, thrust to the top of the agenda by people outside Scotland who have no interest in Scotland’s say. That’s how the UK works. Let’s hope that the question of Brexit wrecks it. 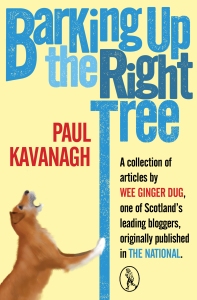 40 comments on “Brexit wrecks it”