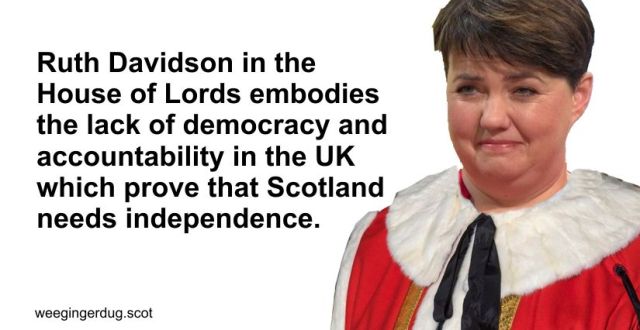 According to reports in the press, Ruth Davidson is to be given a peerage by Boris Johnson and will sit in the House of Lords. She’ll officially become the Barrenness of Principles that she’s been her entire elected career. It’s the traditional reward for Scottish Tories who fail. The Conservatives are the vampires of politics, sucking all the life out of Scottish democracy and we can’t kill their careers with election defeats. As such, Ruth Davidson being given a peerage is entirely unsurprising. The only question is which of her faces is being ennobled. A few years ago Ruth Davidson and her allies in the Scottish Conservative organised Operation Arse in an attempt to keep Boris Johnson away from the leadership of the Tories. Now he’s Prime Minister she’s accepting a peerage from him and is more interested in Operation Kiss Arse.

Still, now she can put the boot in while draped in an ermine robe and without having to trouble herself with trivialities like democratic accountability or answering to her electorate. Not that she ever did. Just as anyone who lives in her constituency and they will tell you that she never bothered to do surgeries to listen to her own voters’ complaints and problems. Now she joins the likes of Thatcher’s McMinion Michael Forsyth, sitting in the Lords, influencing our laws and our public policy, without having to trouble themselves with elections, voting, or democracy.

Ruth Davidson was always a media construct. Her limited talents extended to little more than an ability to perform cheeky cheery photo ops which were beloved by her pals in the British nationalist Scottish media from whence she came. She was a creature and creation of a media which preferred to treat politics as a species of light entertainment. Ruth was happy to oblige, popping up on panel shows, Bake Off, and posing for photos with an assortment of barnyard animals some of whom were not even list seat MSPs for her party. But what Ruth “The Next First Minister of Scotland” Davidson never did was to come close to winning an election.

She failed as party leader. Anyone who has followed Scottish politics knows that Ruth Davidson resigned as the leader of the Scottish Conservatives because she could see the writing on the wall, that her party was facing massive electoral losses and she wasn’t prepared to take the blame for it. That’s exactly what happened in the December 2019 General Election. The Conservatives lost over half of their Scottish seats. However the metrocommentariat in London doesn’t follow Scottish politics, they continue to tell us that “without Ruth Davidson” the Scottish Tories lose seats. Yet the Scottish Conservatives would have lost with or without her. Ruth Davidson was far more concerned about her own reputation than the fate of her party. Although admittedly that is what counts as leadership in the Conservatives. Just look at Johnson and the rest of his cabinet.

Neither was Ruth any more successful as the Saviour of the Union, a vital post for the British nationalist media in Scotland, one which lies vacant since she announced her resignation from the leadership of the Scottish Tories. Her replacement, Surname Surname, would struggle to save the deposit on a bottle of scoosh. Ruth not only failed to make any dent in support for independence in Scotland, her period of time as an MSP has seen support for Scottish independence soar into a consistent majority. And it has largely done so because of the actions of Ruth’s own party. Far from being the go-to for advice on defeating Thatessempee, Ruth has presided over the collapse of what was left of Scottish confidence in the institutions of the British state.

What she did do however was to double down on opposition to independence at all costs, and vanished from the public eye whenever one of her councillors was revealed as a sympathiser of sectarian organisations or the extreme right. Disappearing when faced with difficult questions was very much Ruth’s modus operandi, one in which she was ably assisted by her friends in the media who allowed her to slip from view instead of pursuing her with the same energy that they hound an SNP politician when they get a scent of blood. Ruth got a free pass.

By reframing the Conservatives as the party of opposition to independence at all costs, Ruth Davidson must take a large part of the responsibility for emboldening and empowering the far right sectarian extremists in Scotland, the thugs who took over George Square to intimidate, bully, and threaten. They’re only taking the anti-democratic message of the Scottish Conservatives to its logical conclusion. When you insist that Scotland will not be “allowed” another referendum no matter what its people vote for, you are espousing a deeply undemocratic position. You are granting a fig leaf of acceptability to those who have no intention of accepting democracy at all.

Now she’s getting a lifelong free pass to a political career without any of the troublesome bother of standing for elections, having to be accountable, or democracy. Yet you can bet that this unelected unwanted unaccountable politician will still be popping up on our TV screens and in the columns of our newspapers to tell us what Scotland “really wants”. What Scotland really wants Ruth, is for people like you to be accountable to the voters.

What her peerage certainly means is that the Conservatives have now destroyed any chance of Ruth Davidson being a credible leader for any Better Together Mk II. An anti-independence campaign which is trying to sell a doubtful Scotland on the idea that it can be properly democratically represented within the UK while it’s being led by an unelected politician who is beyond accountability is not a good or a plausible look. It would however be an accurate one – because it’s the lack of accountability and the democratic shortfall which are the most pressing reasons for independence. As a member of the House of Lords, Ruth Davidson will embody all the reasons why Scotland must escape this corrupt and corrupting British state.

79 comments on “The rewards of British political failure”