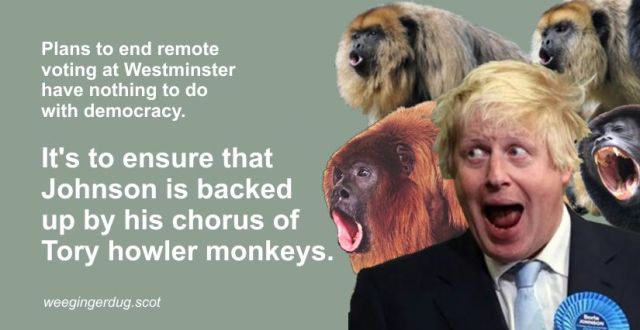 If you’re some sort of masochist with especially recondite tastes, or perhaps if you’ve already binged watched your way through the entire Netflix catalogue as you lay on the sofa in your pyjamas over the past couple of months, you may have subjected yourself to Prime Minister’s Questions broadcast from the House of Commons during lockdown. It’s a peculiarly different experience from normal, without the rows of braying donkeys behind him moonlighting from their usual job providing canned heehaws for crappy sitcoms, Alexander Boris de Pfeffel Johnson stands exposed and stripped of his usual schtick. He’s left as a bully without his gang, an exhibitionist without an audience, a performing seal without a ball balanced on its snout slapping its flippers helplessly together in the hope someone notices how clever it is.

This is why the British Government is so desperate to get MPs to return to the Commons. It’s got nothing to do with health advice, nothing to do with that science they always tell us that they’re following. It’s got everything to do with ensuring that the performer whose stage name is Boris Johnson has an audience of fans who will cheer and clap him, and more importantly jeer, boo, and heckle his opponents.

Johnson is the political version of that old philosophy question, if a tree falls in a forest and no one hears it, does it make a sound? The answer to that question, by the way, is yes but no one cares and maybe if you stopped smoking so much weed then you wouldn’t wonder about such stupid questions – now go and watch Rick and Morty and stop bothering me. In Johnson’s case the question is if a Johnson performs at Prime Minister’s Questions and there’s no Tory howler monkeys to cheer him and heckle his opponents, is he a prime minister at all? The answer to that second question is no. But then the answer to that second question is still going to be no even when Johnson does have his rows of howler monkeys to assist his act. It’s just that with the howler monkeys from the Tory shires, the British Government hopes that it will be harder for the rest of us to notice that we’ve got a bumbling and shambling excuse for an after dinner speaker instead of a Prime Minister. There’s no amount of weed smoking that’s going to make anyone not care about that.

It’s in order to save Johnson’s sorry arse that Jacob Rees Mogg, Leader of the House and the Honourable Member for Self-Isolating in the 18th century, has announced a plan to end remote working in the House of Commons. For the period of lockdown, MPs have been able to vote on motions and participate in committee meetings and debates online. It’s been a remarkable experiment in bringing the British Parliament into at least a nodding acquaintance with the 21st century. Most MPs have agreed that the new system has worked well. It’s allowed them a tiny taste of what it must be like to represent their constituencies as though they were politicians in a proper grown up country, and not participants in a mock-mediaeval charade invented by Victorians in search of a tradition.

Naturally Jacob doesn’t like any of this at all, because if a vote can’t be recorded with a goose quill dipped in ink hand-made from the burnt ashes of witches and inscribed upon parchment made from the flayed skin of peasants who’ve been convicted of failing to doff their caps, Jacob doesn’t think it really counts. So he’s announced a plan to ensure that MPs must attend debates in person, and vote the old fashioned way by queueing up in the Commons and being counted individually in the crowded voting lobbies. Even the House of Lords is set to continue remote working for the time being, but those ermine clad relics of privilege and patronage are far too modern for Jacob.

In order to preserve social distancing and ensure that MPs remain 2 metres apart, the plan means that if all MPs are present, the queue for voting will be 1300 metres long. Although Jacob doesn’t like that Frenchified modern metric stuff, so to put it in terms he’d understand, that’s about the length of 26 Rapunzel worth’s of hair. The voting line would exit the House of Commons, and stretch all the way to the Lego Store in Leicester Square, where MPs could amuse themselves during the time that voting now takes to build a model of Boris Johnson out of lego. It would be considerably more competent than the real one.

However many MPs would be unable to attend the Commons. Some MPs are shielding because they are members of high risk groups, others are responsible for looking after relatives or spouses and can’t do a Dominic and rush off to Durham, others will struggle to attend due to travel restrictions. MPs from Scotland, Wales, and Northern Ireland will effectively be forced to break the lockdown restrictions which remain in force there. The plan not only puts MPs at risk, it also puts at risk all the people who work at the House of Commons. There are some 3000 staff members in various support roles in the Palace of Westminster.

The British Government’s plan has been condemned by the Equality and Human Rights Commission, although equality and human rights have never hitherto figured high on the Tories’ list of priorities and they’re certainly not about to start now. The only Human Right they’re interested in is the right of the Conservative party to cover up how the Prime Minister consistently makes an arse of himself whenever he’s forced to appear in the Commons.

Since many MPs will be unable to attend, the plan effectively reduces what limited oversight MPs are able to exercise over the British Government. It disenfranchises millions of people whose MPs will not be able to go to the Commons in person, and allows the Conservatives to continue to get away with murder. It means that those MPs who are themselves most at risk and so who are best able to articulate the fears and concerns of high risk groups in the population will be unable to attend parliament and ensure that those groups are represented. It’s yet another nail in the coffin of the tattered legitimacy of what passes for democracy in the British state.

And finally, because we could all do with a laugh during these difficult times …

48 comments on “The return of the Tory howler monkeys”