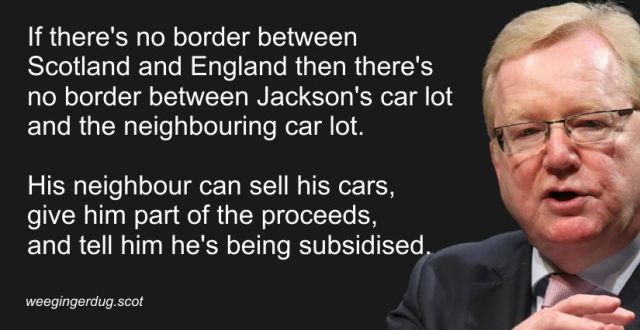 Jackson Carlaw has been at the Dettol again. This time the office manager of the Scottish branch of the We’re Not Nationalists Because We’re British Yay For Boris And Brexit And The Queen Party has, in a single tweet, erased 1000 years of history. There is no border there is only one United Kingdom, he harrumphed in response to Nicola Sturgeon’s suggestion that if the circumstances of the epidemic demanded it she might “ask” for the power to close the border between Scotland and England, a power which she notes she does not currently possess.

Her answer made it clear that in her view we’re dealing here with something that is in the realms of the hypothetical twice removed. Yet even that is a threat to Surname Surname’s preciousssss, a threat which has to be removed. Nicola Sturgeon might have suspended campaigning on the issue of independence, but Jackson sure as hell isn’t going to. He’d have nothing to say otherwise. Indeed his comments about the border show that even when he is banging on about independence he’s got nothing to say.

The insistence that there is no border between two territorially defined entities which everyone else believes to be adjacent to one another can only mean that in the view of the Conservatives there can be no border between any two legally distinct pieces of land which happen to be a part of the same internationally recognised independent state. Logically this means that there can be no border between Jackson’s car lot and the adjacent car lot. All cars for sale on Jackson’s car lot should be sold by the larger car lot next door and then they can give him part of the proceeds and tell him that they’re subsidising him. They might even give him the loan of a painting as well. And it’s very handy of those of Jackson’s neighbours who are without a garden – they can have a barbecue in Jackson’s for the duration of the lockdown.

The border between Scotland and England is one of the oldest borders in Europe, and – much to the chagrin of Jackson Carlot – it remains politically salient today. The border dates back to over 1000 years ago, when England finally acknowledged that Lothian was a part of the Kingdom of Scotland after the Battle of Carham in 1018, although Scotland had actually taken control of Lothian even earlier, in 973 and Scottish influence had been strongly felt in Lothian even prior to that date. With minor revisions, it has remained the English Scottish border to this day. There are few other borders between adjacent European nations which are as ancient as the Anglo-Scottish border.

Even today, the border remains politically and legally important. Different legal systems and laws apply on either side of it. People from on opposite sides of the border have different national identities. The electorates on each side of the border have a very different set of political loyalties and preferences. Different education systems operate on either side of it. Although less important in this modern secular age, the border also marked a boundary between different religious traditions. The border represents a sharp delimitation in differing public attitudes to the EU, that deep political fault line which runs through modern British politics. Since devolution the border also represents the boundary of the area which is governed by the Scottish Parliament.

But according to the Scottish Conservatives, none of this really exists. It tells us that in their eyes there is only a unitary British state in which Scotland exists solely as a colourful continuation of the north of England. That’s exactly the kind of Scotland that they want, a Scotland that is quiescent, obedient, and which has the exact same political priorities as the Berkshire Conservative Association. Any expression of Scottish distinctiveness is seen as a threat.

What Jackson’s idiocy really tells us however is something serious. It shows us that despite the announcement of Nicola Sturgeon that she will not press the case for an independence referendum during the Coronavirus crisis, British nationalists like Jackson have no intention at all of ceasing their campaign against independence. In fact they are hell bent on weaponising the crisis as a campaigning tool against independence, while at the same time railing against independence supporters who have the temerity to point to the UK Government’s woeful mishandling of the crisis as a reason why Scotland desperately needs the ability to take charge of itself.

It’s entirely understandable why it’s inadvisable to press for another referendum under the current circumstances. Under lockdown we would be campaigning without access to the greatest strengths of the independence movement, our proven expertise in face to face, individual persuasion, and our grassroots mass movement’s ability to organise local events and initiatives which are able to tailor the message of independence to individuals and to different areas of the country. The British nationalists are however not so constrained. Their areas of strength rest in the traditional media, which is less affected by the lockdown than the independence movement’s brand of a mixture of individualised campaigning and mass rallies.

But this doesn’t mean that we should stop campaigning for independence, and it certainly doesn’t mean that we should be shy of pointing to the British state’s mishandling of this crisis as a reason for Scottish independence. With less than a mere 1% of the world’s population, the UK is now home to over 10% of reported deaths from the virus. And that’s just on the British government’s figures for deaths in hospitals. The true figure as we all know is considerably higher. According to the website https://ourworldindata.org/grapher/total-deaths-covid-19 which collates worldwide information on infections and deaths, as of Monday 27 April there have been 205,923 reported deaths from the virus of which 20,732 are in the UK – 10.07% of the global total. Britishness kills disproportionately. And now we’ve got the waffler in chief back in Downing Street, under pressure from his frothing backbenchers to end the lockdown even though this will risk a resurgence in cases. Every other country of Scotland’s size has done better. It beggars belief to insist that an independent Scotland would have performed worse than the UK.

So we should not be reticent to point out British mishandling of this crisis, the constraints the the British state puts on the devolved administrations in Scotland, Wales, and Northern Ireland, and the fact that other comparable – independent – nations are doing so much better. Ireland doesn’t have to ask Westminster for permission to close its border or to impose checks on people arriving at airports. Denmark doesn’t have to operate within the framework of devolved powers and leave the most important economic levers to Westminster. Finland doesn’t have a government which needs to constantly fend off a hostile media which is furious at any minor policy divergence from Westminster. The Czech Republic doesn’t need Westminster to borrow money for it to keep families and business afloat during the crisis and then be told that it’s economically dependent. All of those countries are facing the exact same issues that Scotland is, and all of them are performing much better. Scotland could do better too. We must not be shy about pointing that out.

And finally, because we could all do with some cheering up during these difficult times…