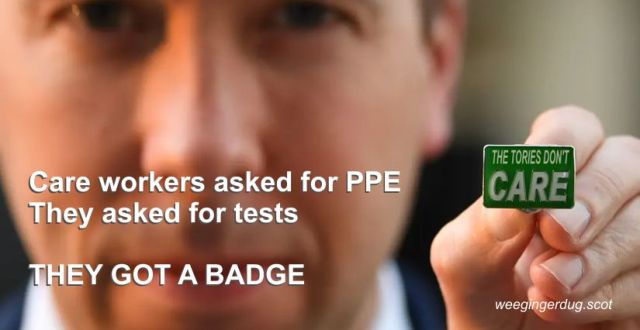 Faced with persistent calls for health and care workers to receive the personal protection equipment and the coronavirus tests which they so urgently need, let no one say that the British government hasn’t been listening. The problem is that it’s been listening to something else entirely, and that something else appears to be the sound that Matt Hancock’s fingers make as he sticks them in his ears and goes la-la-la. Instead of offering health and care workers the things that they’ve been screaming for to help keep them safe as they save our lives and the lives of the likes of Boris Johnson, Matt is instead going to give them all a nice shiny badge. A badge. A… Badge… Can I just ask the Health Secretary a follow up question please – “A fucking badge?”

It’s like the worst episode of Blue Peter ever. And at the next government press conference we can expect a Conservative minister to present us with the tinsel wrapped corpse of a dead care worker propped up on an empty squeedgie bottle and proudly announce, “Here’s one I killed earlier.” This is an object lesson in what happens if you don’t make sure that you get a responsible adult to govern you, kids. Matt wants us to know that if a care worker contracts coronavirus and dies, then their relatives can get one of his shiny badges to put on the coffin. Isn’t that grand? Why, that will make them feel so much better. You can just feel the appreciation oozing out of them as they try to make some personal protection equipment out of a binbag and a pair of marigolds. There are a million things that hard pressed care workers would far rather have received than a pat on the head from Matt Hancock.

The announcement was met with incredulity, the sort you get when you’re expecting to be rescued from a desert island and a drunk guy paddles past you waving from his pedalo before disappearing off over the horizon to tell everyone in the hotel bar how very brave you are. Badges are for boy scouts, girl guides, people who attend sci-fi conventions, members of the Socialist Workers’ Party, and the Sheriff of Tombstone. Care workers would much rather have a living wage and the equipment that they need to do their jobs without dying. Every health and care worker in the land is now reenacting that scene from Blazing Saddles. We don’ need no steenking badges. All they want is to be able to do their jobs safely and with dignity, and what the UK gives them is clapping and a badge. Next time MPs say that they want a pay rise, tell them that they can have a badge instead.

The French have given out €1500 as a bonus to their healthcare workers as a small token in recognition of the sacrifices and risks that they take for the common good. In the UK they get a badge. Or to give it the correct term by which is now widely spread on social media and in hospitals, health centres, and care homes across the UK: WTF A Badge? Unless this badge says “Boris Johnson is an absolute roaster,” it’s highly unlikely that many health and care workers are going to wear it with pride. However it seems that the actual wording on this so-called care badge will be CARE in large letters with The Tories Don’t written above it in italics. A badge. Someone should make a range of badges for care workers, and indeed anyone else who wants one, saying “I’ve been patronised by Matt Hancock” in a range of attractive pastel colours.

It’s not even a new badge. It’s not as though this is the care worker equivalent of the medals won by members of the armed services. This is just the rebranding of an initiative that was launched last year to total and complete indifference. And this was the high point of the entire press conference, the grand finale to which Matt had been leading up. It’s probably not even available for care workers in Scotland and Wales.

Care workers are low paid, hard pressed. They work long hours for little recognition, performing highly skilled and extremely stressful jobs dealing with vulnerable people who have complex and demanding needs. A high percentage are working class women who go home from their demanding jobs which pay a pittance and have demanding home lives looking after children or older relatives. A high percentage are ethnic minorities who are subject to racist abuse from some of the Brexit loving British exceptionalists who put this pathetic bunch of inadequates in power. A high percentage are migrants, who are demonised and traduced by that same Tory government that now wants to fob them off with a badge. These are the very same people who just a few months ago Priti Patel dismissed as low skilled workers who are not valued by the British state and whose immigration status is to be subject to the racist whims of the Daily Mail. But now they’ve got a badge. Isn’t that great.

At the beginning of April Matt had announced a five pillar plan to increase testing. The core of this was that testing would ramp up during the month. Sadly for Matt, and even more sadly for the rest of us, none of the commitments which Matt or his government have made in previous announcements have been kept. He told us just a short while ago that by the middle of April there would be 25,000 tests being carried out daily. The actual number is still only 16,000, a long way short of what was promised. The same Matt Hancock had promised by that by the end of this month there would be 100,000 tests being carried out. On current form that target is going to be missed by a substantial margin. But never mind. There’s a badge. It’s shiny. Just like Matt. And if you stick your finger on the back of it you’ll get a little prick. It’s called Matt.

During the press conference, Matt seemed unable to give any answers to what criteria the government was going to use to end the lockdown. He’d have been as well saying “I haven’t got a clue, but here’s a badge.” Although to be honest that’s pretty much a fair summary of what actually transpired. We’re being governed by patronising idiots. Maybe instead of a badge care workers could get a living wage, decent working conditions, and the equipment that they need to do their jobs without putting their own health and the health of their families at risk. But no. Matt’s giving them a badge and a round of applause. That’s the British state all over. It expects ordinary people to sacrifice and to die, and in return it pretends to care, it patronises, and it offers a shiny worthless bauble. And then it gets back to the serious business of making the rich richer.

And finally, because we could all do with some cheering up during these difficult times… There are real heroes. And none of them are in the British government.

47 comments on “We don’t need no stinking badges”