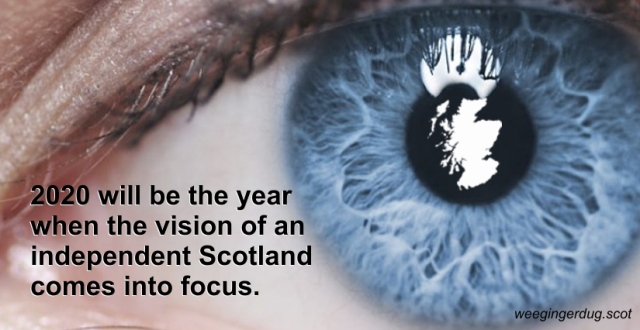 The world that we live in in 2020 is a very different one from the world of 2010. A decade ago, but it seems like a lifetime. In 2010, the Labour party dominated the Scottish political landscape, and talk of independence for Scotland was easily dismissed as the bar room rantings of a few barmy romantics. The primacy of the UK was seemingly unchallengeable. British nationalists could still pretend that support for the UK meant that they were not nationalists at all, and told Scotland that British insitutions were all that stood between Scotland and atavistic anarchy. Only Britain could guarantee decency, toleration, and moderation. We were told that independence was a vanity project, because there were no substantial political differences between Scotland and England.

That’s all changed. No one can now seriously argue that Scotland and England are on the same political page. Well, OK, they can make that argument. But then they’re subject to a Twitter pile on of people laughing at them and making them into memes. There is after all no end to the self-delusion of those who would oppose Scottish independence under all and any circumstances. This self-delusion is equal only to that of this blog’s very own trolls, who continue to post insults and abuse even though their comments are automatically filtered and end up in the trash folder where they get auto-deleted after 30 days without anyone ever seeing them. So, stamp collecting Jim in Livingston and the rest, you’re wasting your time. It does amuse me intensely that trolls keep posting repeatedly on this blog to tell me that my words are having no effect. They’re clearly having a very big effect on the likes of Stamp Collecting Jim.

On a side note, when we do finally achieve independence, I’m going to write something uplifting and optimistic about how this new Scotland belongs to everyone, yes voters and no voters. About how we need to put the past behind us and move on together, that there’s no place for rancour or anger. About how we need to heal and come together as an independent nation. About how yes voters and no voters must hold hands, hug and let bygones be bygones because there’s no yes or no anymore, only citizens of a new and better Scotland, a kinder Scotland, a gentler Scotland. Except you, Stamp Collecting Jim in Livingston. You can fuck off.

But back to the here and now. The Scotland that stands at the dawn of 2020 is a country with a different vision from the rest of the UK. This is a country which has rejected Brexit, rejected Boris Johnson, rejected the transatlantic Trumpian fetish that drives the modern Conservative party. Scotland sees itself as a European nation, informed by the values of social democracy. Scotland understands the importance of ensuring that those who are fortunate in life contribute to those who are less fortunate, because there but for the graces of the gods go all of us. Scotland wants to be open to the world, to look to the future. This is a land that understands that when someone comes here to live, love, work and raise a family, they are honouring us. Scotland understands that migrants are not a burden to be feared or resented.

In retrospect, the cracks forming the political divide between Scotland and the rest of the UK were already visible in 2010, now they have widened into a chasm. Not even Boris Johnson’s fantasy bridge can unite the two sides. British politics are set to descend into further disrepute. Boris Johnson has promised to increase the minimum wage by four times the rate of inflation. He’s promised record investment in the NHS. He’s promising major new infrastructure projects. Yet at the same time the vultures of the Tory party are expecting tax cuts and the prospect of a no deal Brexit is now greater than it ever was before. This is looking very like a prime minister whose honeymoon in office will end in the most spectacular fashion. All this will only increase the dissatisfaction in Scotland, and will continue to boost support for independence.

Brexit will happen in a few weeks. It can no longer be avoided or delayed. However formally leaving the EU will not “get Brexit done”. The coming months will be marked by increasingly bitter and rancorous arguments between the EU and a UK that still expects cake and eating it, still expects unicorns that crap out cherries. The UK will be out of the EU, and there will no longer be remainers in UK politics. For those who support EU membership or closer alignment with the EU than Boris Johnson will permit there will only be a debate about the quickest way to achieve it. For Scotland, that will only make independence a more attractive prospect for many.

We have already seen a change in attitude towards Scottish independence from the EU since the Brexit vote. After the UK formally leaves the EU, there will be even fewer constraints on EU and European figures voicing their support for an independent Scotland. British nationalists claim that the EU wouldn’t want Scotland, but even if Scotland was the economic basket case that they claim it is – which if true would in itself would be an argument that Westminster rule isn’t working – the EU would not be able to resist the symbolism of welcoming a Scotland which became independent from the rest of the UK because of Brexit. It would be both a massive vindication of the European project, and a massive up you to a UK which has rejected Europe. Contrary to popular belief, Germans do do irony.

What has become impossible to see is any way in which Scotland can be reconciled to a Westminster that’s controlled by a triumphant Boris Johnson who commands a large majority in the Commons. Johnson may try to cajole, bribe, persuade us, but based on his character and previous actions it’s far more likely that he will use his majority to try and bludgeon Scotland into submission. Fundamentally, the vision that he has for the UK is one which Scotland has rejected, and Scotland has already demonstrated that it’s immune to the dubious charms of the deliberately tousled liar.

Johnson will almost certainly resist another independence referendum. What we in the indy movement must never do is to concede that Scotland requires his permission in the first place. A referendum without the blessing of Johnson would not be unlawful, would not be “wildcat”. It would be an exercise in Scottish democracy. The Scottish government currently seeks to persuade the Westminster government that it’s very much in the interests of the British state to cooperate with that process, because if Westminster doesn’t cooperate, it’s only going to make independence more likely. They are adopting this strategy in order to ensure that those who are less certain about independence, those whose support we need in order to win handsomely, will be on board if the time comes for an alternative route. However make no mistake, one way or another, Scotland will have her say. Our job in the wider movement is to ensure that the pressure is kept on.

There is only one trajectory now, and that’s the one that leads to independence. The road is rocky. There will be temporary reverses along the way, but Scotland is increasingly finding its voice and its place in the world. That’s a voice and a place that don’t need to be moderated or channelled through a Conservative dominated Westminster. 2020 will be a crucial year in Scottish history. It will be the 700th anniversary of the Declaration of Arbroath. This will be the year when Scotland makes a new declaration of faith and belief in itself as a modern, progressive, outward-looking European nation. This will be the year when the vision of a better Scotland, an independent Scotland, comes into focus.