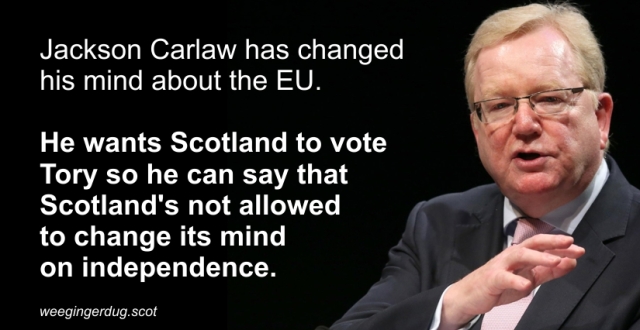 Jackson Carlaw, who is currently stomping around Scotland to tell us that the result of the 2014 referendum can’t ever be revisited because it was apparently a once in a generation thing, isn’t quite so absolutist in his opinions when it comes to other topics. He now tells us that despite the fact he campaigned to remain in the EU in 2016, he now supports leave and would campaign to leave the EU if there were ever another EU referendum. He’s changed his mind because he says circumstances have changed, and the EU that he thought the UK was a part of is in reality a very different proposition from the one he thought he was signing up to. He complains that the EU now wants its own army, and that’s something he’d never agree to. He’s changed his mind about the EU. Tories are allowed to change their minds on political questions. It’s just the rest of us who aren’t.

A Conservative changing his mind about the EU and resolving to vote differently in another EU referendum is of course totally different from wanting another Scottish independence referendum because circumstances have changed, because Scotland is being taken out of the EU against its will despite being assured that it could only remain in the EU if it voted against independence. Totally different from the realisation that the UK that Scotland was promised that it was a part of, that equal partnership of nations in which Scotland is respected and listened to, turned out to be a lie. Totally different from discovering that the key promises of the Better Together campaign were traduced and broken by Westminster, promises such as the one saying that the powers of the Scottish Parliament would never be altered or changed by any Westminster government without the express consent of Holyrood. It’s totally different, because reasons.

This is not, of course, because Jackson is terrified that if there is another independence referendum in Scotland he’s going to be on the losing side of it. Oh no. Heaven forfend. He’ll be dead by the time there’s another independence referendum. It was a once in a generation thing, and he’s determined to make sure that everyelse currently alive in Scotland will be dead by then too. Although given the way that the Tories are trashing the NHS in England and funding for public services in general that may be rather sooner than he thinks.

It’s Tory policy not to allow anyone else in Scotland to change their minds, because Alex Salmond once had an opinion and that’s as good to Jackson as holy writ. It would be lovely if Jackson had the same degree of reverence for the promises that his own party made – equal partner in a union anyone? – but hey, you can’t have everything. Or indeed anything, if you’re Scottish. Everyone in Scotland has to be held to account for Alex Salmond’s opinion in 2014, but Jackson can change his mind as it suits him. His opinions are British opinions after all, and moreover they’re opinions which allow him to pose as a leadership candidate in a party which has morphed into Ukip. This is the guy who was telling us just a couple of years ago that voting for independence meant leaving the EU and that was a bad thing. This is the guy who was warning us just a few years ago about all the damage to Scotland’s economy that leaving the EU would cause. Principles eh? Jackson’s got plenty of them, principles to suit any occasion.

Hypocrisy and entitlement ooze out of the British nationalist parties in Scotland. You’d almost think that they were Prince Andrew, although they are sweating heavily at the prospect of another independence vote.

Not to be outdone in the entitlement stakes, the leader of the Labour party’s branch office in Scotland, Rigoberto Losevoter, has averred that the SNP will support a minority Labour administration and get nothing in return. Although he may deign to refrain from SNPbaddery on Tuesdays during months with an even number of letters in their names, when there’s a full moon, and between the hours of 2.15 am and 2.25 am. No guarantees there though. It’s taking ordering Scotland about to new levels. Scotland exists within the UK purely in order to rescue England from the consequences of its own voting habits and the Scottish electorate should be grateful at being given the glorious opportunity of acting as airbags in the car crash of British politics.

Anyway, continued Roscoe Looksworseforwear, Labour’s going to win a majority in this General Election, and then you’ll all see just how fantastic it is to be British and no one will talk about Scottish independence ever again. Then he scrunched his eyes shut, clicked his Labour ruby red slippers together and chanted there’s no place like home, there’s no place like home, in the hope that it would make all those Scottish voters who have deserted his party return to him. Some of his colleagues have even called upon the federalism fairy to wave her sparkly wand, but Rowland Lowexpectations is having none of that. He doesn’t care that 40% of Labour voters in Scotland support independence, all it’s going to take is a dose of Jeremy Corbyn as Glenda the Good Witch of Nationalisation and they’ll come flocking back. It’s just a shame that not even Toto is following him anymore.

That’s your choice in this election Scotland. You can be treated with contempt by hypocritical Tories who believe that they’re the only people who are allowed to change thier minds on anything. It’s a Tory party that believes it’s not for the people of Scotland to determine Scotland’s future, it’s for a Boris Johnson sooking up to Donald Trump. Or you can be taken for granted by a Scottish branch office of a Labour party that still hasn’t learned the lessons of the past decade. Or you can vote for a party that’s going to assert that it’s up to the people of Scotland to decide what path they want Scotland to take and demand the right for us to choose it. You can choose choice, or you can choose submission.

40 comments on “Vote for choice, or vote for submission”