A guest post by Gwen Sinclair of Yes East Ayrshire 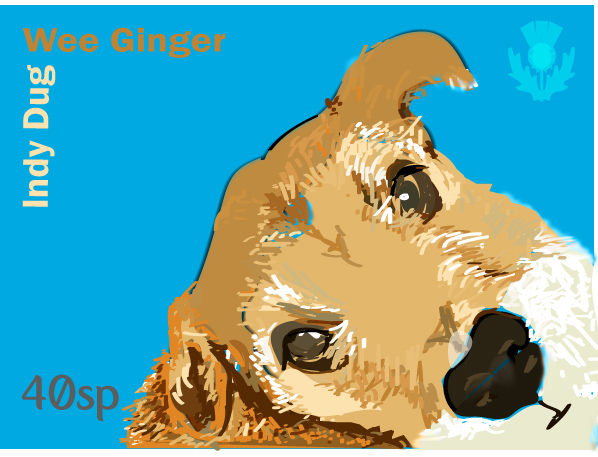 The idea for Indy Stamps came about a few months ago when I was thinking about new ways to spread our message of Independence for Scotland. I had been involved in designing a  limited edition set of Island postage stamps and a first day cover for the Isle of Raasay to commemorate the local buy-out of their Community Store back in 2014. I remembered how popular this was; stamp collectors also snapped them up.  It was an idea that I thought might interest the Indy Movement, since people can add them to their letters or cards – alongside a usual postage stamp of course; these stamps would be seen by whoever receives them, as well as in transit – perhaps travelling round the world!   It is also nice to think that one day soon we might have our own Scottish postage stamps, and so I have made up a name that might well one day be used – “Alba Postadh” with two unicorns and a thistle as the emblem. These are quite small on the stamps, but it’s there all the same! 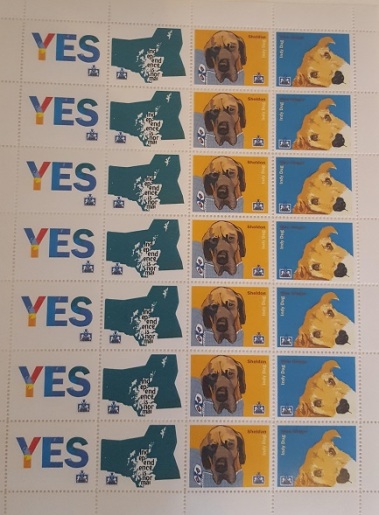 I have been donating  graphic design, artwork, film, crafts, and jewellery for the Independence campaign since 2014, starting from when I made a poster to help bring in new volunteers for Yes East Ayrshire based in Kilmarnock.

After the referendum in 2014, many of the Yes East Ayrshire team had no intention of giving up and we carried on with weekly street stalls in Kilmarnock town centre for quite some time, where we undertook a very successful food bank collection.  We chose a subject for each stall, eg pensions or fracking, and I would produce a new leaflet each week and monthly newsletters spreading the news that we knew the mainstream media would not!

I designed professional branding for our Yes East Ayrshire Campaign, with a new logo which is fairly well recognised now, with its shape of East Ayrshire inside a flying bird carrying a saltire in its beak. It has featured in many leaflets, on our on-line media sites (Twitter, Facebook, LinkedIn, Instagram,TripAdvisor, Google, IndyApp), and also all our leaflets and merchandise,  More recently, I developed it to feature as the sign above the door and on the window graphics of our Yes Shop in Kilmarnock!

For the stamps, I chose images of the new Yes logo with the addition of a map of Scotland in each letter, just in case a letter or parcel might make its way across the world where our Yes Campaign is not so well known. Another features my favourite phrase “Independence is normal”, which I think says it all. I have added some of the sea area to also remind people Scotland is much larger than they might think!   The dark area denotes the stolen sea that Tony Blair took from our maritime alloted territory. This is a travesty; it must be returned.

The other two are of my favourite Indy Dugs.  Sheldon has recently become something of a mascot for the Saor Alba Pipes and Drums, and with his owner, Jane Cooper Stewart, proudly led the Edinburgh March last month, looking every bit the regal king of Indy Dugs with his selection of Indy coats which I feel epitomises the fun, happy, attitude of Scotland doing it our way. It’s always a joy to see all the dogs with their special indy-messaged attire at our marches and rallies,  and I always think they are showing any undecided voters that its ok to be part of this – everyone is welcome, four legged friends and two! Wee Ginger Dug is one of our best known indy dogs, and also one of my favourites, not only because he has his own blog, with the help of his owner, Paul Kavanagh, which has made an enormous contribution to our cause, but also that he is, like Sheldon, a bit of a star in his own right and I love to see him.

I hope very much that Yes Campaigners will buy a strip (one of each stamp) for £1.00 or a sheet of 7 rows of the set of 4 Indy Stamps (£6.50) to add to their Christmas cards this year.  Contact yeseastayrshire@gmail.com to find out how you can buy them via PayPal and we will post them out.  All profits from the sale of the Indy Stamps will go towards helping to keep the Yes Shop in Kilmarnock going strong.

My biggest wish is that they get out there and spread the message! I would like to give special thanks to SIF (Scottish Independence Foundation) who have recently awarded me a financial contribution to help me upgrade my hardware so that I may continue to produce graphics for our independence campaign, as well as assistance with the cost of printing the stamps. This would not be possible without the donations from you, our Indy movement and I would like to thank you all!