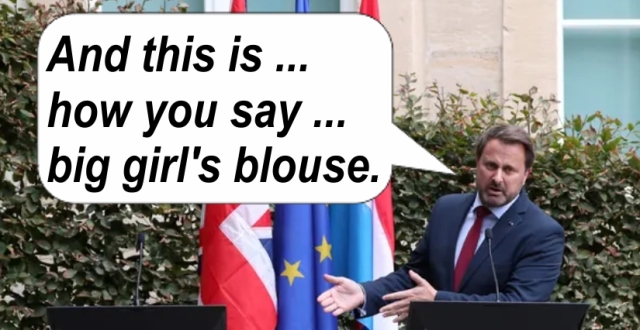 It’s keeping me awake, trying to remember which one of the Avengers movies it was where the Hulk was confronted by a tiny number of people booing and ran away and hid. I don’t recall the Hulk ever saying, “You won’t see me when I’m angry.” Still at least we all know now how to get rid of him. Just form a crowd of 50 protesters with some very polite placards. Alexander Boris de Pfeffel Johnson likes his macho insults, but after spending a week calling Jeremy Corbyn chicken, and referring to David Cameron as a big girl’s blouse, now we see that all his tough talk has less substance than a deflated airbag. He could be defeated in a cage wrestling contest by a girl guide who’s suffering from a bad case of narcolepsy.

He spent years plotting and scheming to get the top job in British politics, and now he’s achieved his lifelong dream the whole world can see how out of his depth he is. He’s only been in office for a few short months and he’s already the worst Prime Minister in British history. He is, to use a guid Scots word, a blawflummer, a self-important empty person who cajoles and deceives as he showboats his way through life. He’s a vacuous vanity who parasitises the body politic, and who tells himself that what he has is due to his immense talents, when it’s really all down to his his accent, his schooling and his connections. If he’d had the misfortune to have been born into a working class family in a council estate in Blackburn, he’d be that blawhard in the pub that everyone avoided, the serial wickdipper with a string of kids, who was always trying to interest everyone in his latest fantasy scheme that will go pear shaped just like all his schemes before. Give him a posh accent and an Eton education and he becomes a character. And that, in a nutshell, is the fundamental disgrace of the English class system.

The Luxembourg Prime Minister, Xavier Bettel, could barely disguise his utter frustration and anger with his British counterpart. He referred to the Brexit … situation. You just know that he wanted to say “shit”. It was obvious that he felt that the entire occasion was a waste of time, an attempt by LBJ to shift the blame for the failure of the talks to progress onto the EU. But for talks to progress, for talks even to take place, there has to be something to talk about. The UK isn’t proposing anything. There’s nothing to discuss, and the EU and the Luxembourg government have no intention of being bit players in LBJ’s games.

There are still those in the British government and media who are pretending both to themselves and to the rest of us that Alexander Boris de Pfeffel Johnson is serious about trying to get a Brexit deal negotiated with the EU. He can’t even negotiate a press conference with Luxembourg. You’d think that even the most resolutely BBC-balanced reporter would by this time be screaming that the government hasn’t got the slightest intention of getting a deal. It is blindingly obvious. But no. LBJ still gets away with his lies and deceit, and it takes a bunch of demonstrators in Luxembourg to show him up for the mendacious burst bag of wind that he is. He even makes the Lib Dems look consistent and principled.

There’s still nothing remotely approaching a serious proposal from Whitehall about how to deal with the Irish backstop. There’s still no details from the Government about how this alternative to the backstop could work in the real world that we actually live in, as opposed to the world in which Lyin’ Bastert Johnson thinks he’s channelling the Hulk. There’s still nothing about how exactly, in the vanishingly unlikely event that a deal was struck, that all the necessary legislation could get through Parliament within the extremely tight timetable created by Lyin’ Bastert Johnson’s decision to prorogue Parliament.

The Prime Minister is still insisting that he’s not going to ask for an extension to Article 50 as he is obliged to do by law. He’s still insisting that he’s not going to break the law. At least one of those things cannot be true. Both those things could be untrue. What is a logical impossibility is that both of those things can be true, except if LBJ has managed to get a hold of an entire set of Infinity Stones. And that’s about as likely as the British Prime Minister getting through a day without lying about something. The Government might as well tell us that it’s official British policy to build one of those brain melting structures from an Escher print. Which to be honest, isn’t actually that different from what LBJ is proposing with that bridge from Scotland to Ireland.

It is arrant nonsense to suggest that the Prime Minister can produce a square circle out of his Brexit hat, but that’s what we’re being led to believe. There is no wizzard wheeze which can achieve the mutually contradictory aims of not asking for an extension to Article 50, and not breaking the law. If there were we’d have heard it by now, the same as if there were a solution to the Irish backstop issue we’d have heard that by now. We have instead a Government which is treating us all like mugs.

Tomorrow the UK Supreme Court is due to start its hearing, and by the end of the week it will rule on whether it was the Scottish Court of Session or the English High Court which was correct in its judgement on the illegality or otherwise of LBJ’s prorogation of Parliament. This is British democracy itself which is on trial. If they find that the Scottish Court of Session was correct to rule that he’d broken the law, then we will be in the middle of possibly the greatest constitutional crisis since the UK was established in 1707. But if the judges find that the matter is political, that the law was not broken as the English High Court ruled, they will be giving LBJ or whatever unprincipled charlatans who succeed him carte blanche to ride roughshod over Parliament. British democracy will be dead. The only remedy for Scotland is to escape.