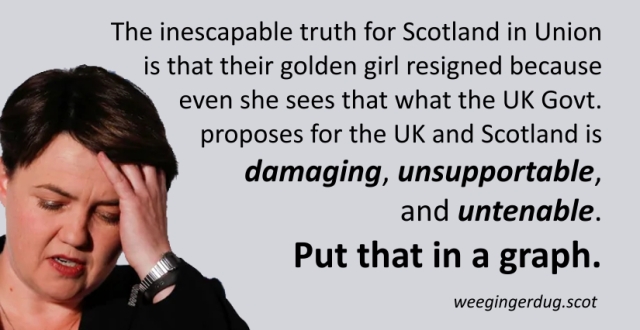 Ruth Davidson has gone, and the gushing eulogies from clueless people who know the square root of hee haw about Scottish politics are already in full flow. All of them ignore the elephant in the Ruthroom, the fact that the only future her career had left was behind her, and all that lay in front was humiliation and defeat. Her career was always buoyed up by the ignorance of a media establishment which knew nothing about Scotland, and the British establishment in Scotland’s desperate need for a saviour from an independence movement that only grows stronger and more entrenched in Scottish politics with every passing slight from Westminster.

On BBC Newsnight last night, the Tory pundit Iain Dale ruefully predicted that without Ruth at the helm, the Scottish Conservatives were facing the likelihood of electoral wipeout in the snap General Election that is being widely forecast. No Iain. That was going to happen anyway, and it’s one of the main reasons why Ruth has decided to resign now. The very best that she could have done is to assist in the damage limitation exercise.

Although she couched her resignation in terms of wishing to spend more time with her young child, it’s pretty obvious that had her political career and ambitions been going wonderfully, that resignation speech today is one that she would not have made. She would certainly not have made it on the very same day that there’s a Holyrood by-election in Shetland. She was so alienated that she couldn’t even wait until Monday. What a shame for poor Brydon Goodlad, the Tory candidate in Shetland who has “Ruth Davidson’s candidate” plastered all over his electoral leaflets. Well I say “shame”, what I really mean is “ha ha”.

For the independence movement, the downside of losing Ruth as leader of the Tories is that we can now expect her to embark on a career on a telly studio sofa somewhere. And when the next Scottish independence referendum campaign starts officially, we can certainly expect some Ruthterventions. That’s something we can live with. However the inescapable fact for the Scotland in Union brigade is that their golden girl has resigned because even she can see that what the British government is proposing for the UK and for Scotland is damaging, unsupportable, and untenable. Put that in a graph.

Ross Thomson issued a statement about Ruth’s resignation. It was the sort of statement that made you go “Aaaawww … bless” as you realised that Ross actually thinks that people care about what he’s got to say. Of course nowhere in the statement did Ross display the slightest recognition that his constant undermining of Ruth’s authority with his support for a hard Brexit and his embarrassing behaviour might just have played a role in leading to her decision to resign. But then if he possessed that degree of self-awareness he’d never have put out a statement in the first place.

I strongly suspect, although it’s the last thing that she would have wanted to mention, that one of the factors leading to Ruth’s resignation was the prospect of heading a losing No campaign in another independence referendum. Brexit made Ruth’s personal position untenable. She’d have been leading a No campaign which sought to keep Scotland out of the EU along with the rest of the UK, and all the while Yes campaigners would have been throwing back ever pro-EU comment she’s ever made in her face. She’d go into the history books as the Unionist who broke the Union, the woman who led the British state into its greatest defeat in Scotland.

Those of us who support independence have criticised Ruth – correctly – as a media construct. She was always bereft of political substance, her biggest strength was that she knew how to manipulate a British media in Scotland that was desperately in search of a Saviour of the Union after the Labour party crashed and burned. Her close ties to the media in Scotland were instrumental in raising her profile and building her up into the figure she became. She gave good photo ops, and that played well with the press. Her successor will not enjoy that same relationship, and will struggle to build the same media and public profile. That will be especially true if, as is likely to be the case, her successor is a middle class white man who is very much in the Tory patrician mould. That’s the kind of person who will struggle to appeal beyond the traditional base of Conservative support in Scotland.

Ruth Davidson may have presented a new modern image of liberal Conservatism, but she led a party that was and is still full of unreconstructed sectarian bigots, racists, and extremists. Their new leader will be drawn from those ranks. Her resignation will only have emboldened those extreme elements which she herself did nothing to quash or to distance herself from. The Tories have killed themselves with Brexit, and they’ve destroyed any chances that they ever had of keeping Scotland within the UK. They only have themselves to blame.

There’s very little that’s predictable in politics these days. As I write this we are still waiting to hear the decision from the court case in Edinburgh where anti-Brexit politicians are seeking a ruling that the UK Government’s decision to prorogue Parliament is illegal. A decision is due tomorrow morning. The plaintiffs, led by the SNP’s estimable Joanna Cherry, are arguing that the British Government’s decision to prorogue Parliament runs contrary to the Scots legal doctrine that Scotland is a legally limited monarchy, and that the power of the crown cannot be used “in violation of the kingdom”. That distinct Scots legal tradition was maintained and enshrined in the Treaty of Union of 1707, it was not superceded or abolished by it.

Should the court rule that Scots law has indeed been broken by the British Government, it will only strengthen the resolve of that large section of the Conservative party in the rest of the UK that it would accept Scottish independence as the price of forcing through Brexit. A Scotland that is seen to stand in the way of Brexit will unleash howls of outrage from the English nationalism which is the motive force of this current government.

Ruth Davidson has stood down because her single policy was to say No to independence, yet she’s faced with a British government which has only fuelled the need and appetite for it. She has belatedly realised that she was leading a party which is the unwitting midwife of Scottish independence.