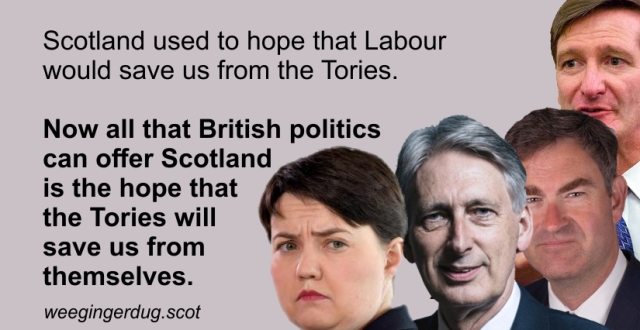 It’s now clear what Alexander Boris de Pfeffel Johnson’s game plan is. He’s written a letter to the EU demanding the removal of the Irish backstop but offering no solutions to replace it, all so that he can blame the EU for a refusal to renegotiate the Brexit deal. Then either following a no-deal Brexit, or following the refusal of the Commons to allow a no-deal Brexit, he can call a General Election and blame everyone else for his mess. Just as he does in his personal life, so he does in his political life.

As expected, European leaders have dismissed the letter. It’s “Get off my fucking laptop,” but on a European wide scale – the response to the letter from Europe is the entirely predictable, “Get off my fucking backstop.” How else could they reply? The letter from the Prime Minister offered nothing new, just a series of petulant demands that the EU has already said repeatedly that it’s not going to allow. The EU described the letter as inaccurate and misleading. Which is a kind and diplomatic way of saying that Alexander Boris de Pfeffel Johnson has been writing diplomatic letters with the same regard to truth as he displayed in his bendy bananas articles for The Telegraph.

The EU points out that the letter doesn’t provide any sort of framework which can realistically replace the backstop that the British Government is so determined not to accept. It does nothing to ensure the avoidance of a hard border on the island of Ireland. It does nothing to guarantee that any of the alternative arrangements – those arrangements which in any event the letter leaves unspecified – would be in place by the end of the transitional period set out in the leave deal agreed with Theresa May.

Some of the points made by Alexander Boris de Pfeffel Johnson in the letter are breathtaking in their mendacity even by the standards of the man who invented the lie about bendy bananas. The backstop, he avers, is wrong because Northern Ireland will be subject to a regulatory regime that it didn’t vote for. That’s the Northern Ireland that voted against Brexit there. The Northern Ireland that’s getting a Brexit that only the DUP voted for.

He claims that it’s those who support a backstop, a mechanism for ensuring that the border on the island of Ireland remains open, who are the ones who are really risking the Peace Process. That’s because the DUP opposes the backstop and it would be imposing something on them that they don’t support. That would be that DUP which receives around 36% of Northern Irish votes. The votes of the 64% who don’t support the DUP don’t count. It’s very similar to the claims made below the line in the digital editions of newspapers by those who go on about how votes of the minority of Scots who supported Brexit need to be respected, and to hell with the majority who rejected it. Only this time as government policy. There’s hypocrisy, and there’s Tory party hypocrisy.

The desire of the British government to have mutually contradictory outcomes is all the fault of the EU. It’s Britain which is leaving the EU, but the resultant problems are all someone else’s fault, and every other country in Europe ought to make accommodations to the UK. Alexander Boris de Pfeffel Johnson’s letter has only made a bad situation even worse, and made it even less likely that some sort of deal can be reached.

It should be obvious by now that this government is actively pursuing a no deal Brexit. The plan is to leave without a deal, and then to ensure that the public blame the EU and remain minded MPs and their parties for the resultant mess. Alexander Boris de Pfeffel Johnson doesn’t care about job losses. He doesn’t care about the cost to the public purse. He doesn’t care about you or me. All he cares about is making sure that he wins a General Election so that he can stay in Number 10. He’s quite prepared to sacrifice the rest of us in order to do so. We are mere pawns in the game of his ambition.

There’s an article in the Guardian today by Poppy Trowbridge, a former advisor to the previous Chancellor Philip Hammond, which discusses the importance of remain minded Conservatives actively blocking no deal. The author urges them to put the interests of the UK before the interests of their careers. She doesn’t hold out much hope that they will. She’s reduced to expressing the hope that the best chance is for Ruth Davidson to speak out strongly against Alexander Boris de Pfeffel Johnson’s plans. The entire piece reads like a desperate plea for a miracle from someone about to be executed.

Let’s get real here. If your best hope is Ruth Davidson standing up against the Conservative party, you’ve already lost. Ruth has spent the past few weeks in hiding, only popping out from underneath her shed in a forest in Aberdeenshire when the Labour party in Scotland went into meltdown. She was relieved by the distraction caused by branch office manager Randy Legstretcher getting slapped down by John McDonnell and Jeremy Corbyn. Following the accession to power of Alexander Boris de Pfeffel Johnson it took a lot to end up having a worse political time of it than Ruth Davidson, but the branch office managed it. And who said that you could never rely on the Labour party in Scotland?

When all you have left to go on is the wish that there are Conservatives with enough moral fibre to stand up against their own Prime Minister and put their careers on the line, you might as well pack up and go and live in Ruth Davidson’s bunker stockpiled with tins of baked beans. This is however where we are now in the UK. For decades the abiding theme in Scottish politics was the hope that the Labour party could save us from the Tories. We learned the hard way that was never going to happen. Now the very best that British politics can offer Scotland is the wish that the Tories will save us from themselves.