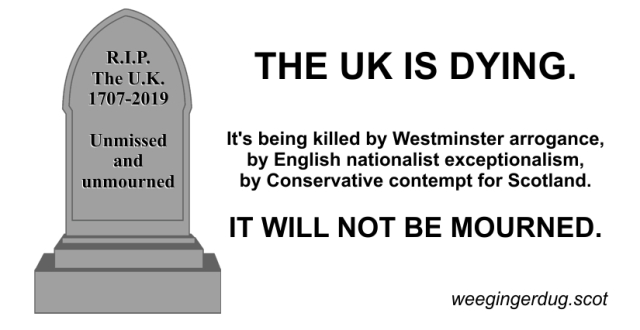 You can smell the panic. It is composed of equal parts stale sweat and stale alcohol, the rank breath of the morning after the night before, and a slew of tweets and press releases desperately attempting to forestall the inevitable. You’ve been found out, and it’s just a matter of time before the consequences come home and see the wreckage. That’s the uncomfortable place where the Scottish Tories are right now. I’d feel sorry for them, but … nah. Hell slap it intae thaim, as yer maw would say.

Today, Monday, Sky News released the results of a poll of Conservative party members about who they thought would be a good party leader and Prime Minister. Boris Johnson topped the poll at 77%, followed by Dominic Raab on 68%. Rory Stewart, the darling of the Guardian comments section, trailed in a poor last at 31%. The more brazen lies you tell, the the better your chances of becoming Prime Minister. The crazier the candidate, the more reckless he is, the more likely he is to rip the UK out of the EU without a deal, the more popular he is with the wildly unrepresentative selectorate of golf club boors and pursed lipped net curtain twitchers bearing a grudge. The UK is so screwed.

Hence the panic amongst the ranks of the Tories’ Scottish branch office, a branch office which is much diminished and is soon about to diminish even further. Not one of the 13 Scottish Tory MPs has backed Sajid Javid, who is Ruth Davidson’s preferred candidate. They’re going for various shades of batshit Brextremist. What was that again about Scottish Conservative MPs voting as a block and being led by Ruth Davidson? We’ve not heard much about that recently. Still, I’m sure that someone from the British media in Scotland will be along very shortly in order to ensure that she explains herself. Oh. No. The other thing.

The diehard opponents of independence who infest Scottish social media are equally perturbed. You don’t have to scratch much below the surface bravado and bluff and the fear shines through. “If you think it’s about who might be the next Prime Minister, you don’t understand the question!” They protest. But we understand the question all too well, and the question is one of democracy. As part of the UK, Scotland doesn’t get to decide its fate. Its fate is decided for it, by politicians who know little about us and care even less.

Symbolism is important in politics. In one sense it makes no difference whether the politician which Scotland didn’t choose to be Prime Minister is Theresa May or it’s Boris Johnson. In another sense it makes all the difference, and that difference is what Boris Johnson represents. He represents an upper class English entitlement to rule, a casual disregard for the truth, a complete lack of interest in Scotland. There is no way in which the victory of Boris Johnson in the Conservative leadership contest can be painted as being good for Scotland. The symbolism of Boris Johnson is a Scotland as a province, subordinate and impotent, prostrate before the power of a cartoonish Etonian posh boy. Boris Johnson represents a Brexit that is England talking to itself. That’s not a good look if your main schtick is trying to persuade Scotland that it’s really a valued partner in a family of nations, that Scotland is an active player in determining its destiny within the UK.

The Scottish Conservatives are facing an extinction level event should there be an early general election. The chances of that election are increased should, as appears highly likely, a hardline Brextremist like Boris Johnson becomes the next Prime Minister. He will be a Prime Minister without a personal mandate, without a mandate for a no-deal Brexit. As soon as his Brexit fantasy crashes into the hard reality of the EU, and the majority in the Commons determined to block a no-deal exit, the only remaining option will be for him to go to the polls in order to secure a majority for the kind of hardline Brexit he was elected by the party members to deliver. There are already reports that there have been talks between Conservative party donors and the Brexit party in order to form an electoral pact.

This means that a path to independence is beginning to appear in the fog of Brexit. It’s crucial that if the UK government falls that the SNP campaigns in the general election on a platform of ensuring that the people of Scotland get their say on Brexit. It’s even more crucial that the independence movement ensures that we maximise the SNP vote. I’m sorry Greens and minor parties, but in Westminster style FPTP elections if you support indy, you need to vote SNP, even if you don’t agree with all their policies on everything. The imperative in this next election will be to maximise pro-independence representation in the Commons. All opinion polls point to a strong showing from the SNP in Scotland if there’s an early general election. We need to wipe out the 13 Tories. We need to take seats from the Labour party. We need to demonstrate that Scotland demands the right to decide for itself what it’s future is going to be.

The real reason that the Scottish Tories are falling over themselves just now to put obstacles in the way of another independence referendum, to persuade the leadership candidates to rule out permitting another indyref, is because they know that right now is the high tide of their influence. After an early general election, no Conservative Prime Minister is going to care what Scottish Tory MPs say, because there will be at best only a couple of Scottish Tory MPs and not even Sajid Javid could claim that Ruth Davidson was a winner.

In a parliament of hard line Brexiters in an England which remains narrowly divided, where the rump of the Conservatives depend on the support of the Brexit party, where Scotland has wiped out pro-Brexit MPs and the SNP has just won a handsome victory, there will not be the same willingness to continue to deny Scotland another independence referendum. Removing Scotland from the equation will only strengthen the pro-Brexit forces in Westminster. Faced with a choice between keeping Scotland or keeping Brexit, they’re going to choose Brexit. If Boris Johnson has a choice between keeping Scotland within the UK, or consolidating his own power, which do you think he’s going to choose?

In an article in the New Statesman this week, arch-unionist Chris Deerin wails that the UK is dying of neglect. No Chris, it’s dying of arrogance. It’s dying of English nationalist exceptionalism. It’s dying of contempt for Scotland, Wales, and Northern Ireland. All that’s left is to arrange the funeral. That’s the tragedy of the vanishing breed that is the Scottish Unionist, and it is our opportunity.

44 comments on “The death throes of Britain”