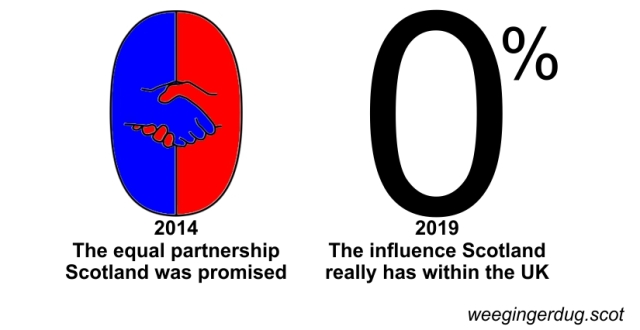 In an interview today with Tory supporting LBC radio presenter Iain Dale, Esther McVey gave us all a masterclass in political idiocy. Railing against giving foreign aid, she spoke about an airport that can’t be used because it was built in the wrong direction and windshear means planes can’t take off or land safely. What a terrible waste of UK aid money. Money that could be better spent on weapons of mass destruction, tax cuts for rich people, and paying the army to mount barricades against rioters protesting that the supermarkets are empty because of a no deal Brexit.

So where is this airport then, she was asked. “It’s on one of the continents … eh … abroad,” she stated confidently, safe in the knowledge that all foreign aid goes to one of the continents abroad. She might as well have said, “It’s on planet Earth.” Actually she’d have been more accurate to say that it was on planet Earth as the airport in question is only in one of the continents in a technical sense. It’s really on the island of St Helena, which sits in the Atlantic Ocean 1200 miles off the coast of Africa. Geologically speaking St Helena is a seamount produced by volcanic activity in the Mid-Atlantic Ridge. So it’s sort of in Africa, but not really. It’s not abroad either. St Helena is a British territory, and its inhabitants are British citizens. So it’s not an example of overseas aid.

It was always going to be difficult to build an airport on St Helena. It’s a rocky and mountainous island, despite its small size. Although it’s only 44 square miles in area, it is composed of rugged and hilly terrain, which rises to the 2,684 ft high Diana’s Peak towards the south of the centre of the island. Flat land is in very short supply. There are not many places on St Helena where it was possible to build an airport. Wind shear is always going to be an issue for an airfield on a mountainous island in the middle of the South Atlantic, but although the windshear issues were greater than first forecast, the airport is currently in use. There are regular scheduled flights between the island and South Africa.

So it’s not foreign aid. The people it was built for are British citizens. It’s a British territory so it’s not abroad. And the airport does actually function. But other than that Esther was quite right.

It’s a trivial example really, but Esther McVey’s idiocy is an illustration of how this Conservative leadership race is driven by misinformation, foolishness, prejudice, and a wilful disengagement from reality. It’s not just Esther who is guilty of that, all the Conservative party candidates are equally happy to preach hypocritical cant. The candidates are of such a low calibre that the one who comes across as the most reasonable by far is the one who wrote and presented a BBC documentary to tell us all that Scotland is imaginary, who makes up statistics to suit his feelings, and who wants to transform the scouts into a chain gang.

As I type this, Sajid Javid is on the TV making his leadership pitch, telling his fans and the press that he’s ideal to be the next Prime Minister because the millionaire former banker is an outsider. He makes a big play of how his dad arrived in the UK from Pakistan with just £1 in his pocket. But Sajid wants to make sure that no one else can do what his dad did. He wants to raise the income threshold for migrants to the UK to £30,000. His plans to resolve Brexit are even fluffier and vaguer than the other candidates, and none of those are exactly well defined and well thought through.

Then he said that the change Ruth Davidson has brought to Holyrood is the same change he’s going to bring to Westminster. Does Sajid think that the Tories won in Scotland? Is he planning to lose seven elections in a row? Does he realise that the Conservatives ended up in fourth place in the EU elections in Scotland? Does he know that all opinion polls point to the Tory party being obliterated in Scotland at the next General Election and losing seats in the next Scottish elections? Fine Sajid. That’s the kind of change we can live with. This is what happens when you get all your information about Scotland from Ruth Davidson’s press releases.

But the big launch of the day was from the Blusterer in Chief. Boris Johnson finally crawled out from his hiding place and held a press conference to mark the official start of the campaign that he’s been unofficially running for the past ten years. It was polished, bombastic, oozing a carefully manufactured sincerity, and entirely fact free.

He started by claiming that he could secure a better Brexit deal than Theresa May’s, even though the EU has said repeatedly that the deal is not up for renegotiation. And even if it was they wouldn’t be about to do Boris Johnson any favours, since he’s universally despised in EU circles. But Boris Johnson wants us all to think that he can change this solid political certainty by sheer force of a total conviction in Britain. The only reason that Brexit negotiations have so far failed to produce the unicorns, cake, and magic beans demanded by Brexiters is because we haven’t believed in them hard enough.

Yet as soon as total conviction in Brexit collides with the EU, it will only strengthen those in Europe who have had quite enough of the UK’s delusions. That’s what Boris Johnson is really after, a means of portraying the EU as intransigent and unreasonable. Then he can play to the victimhood fantasies of the right wing English nationalism that has driven Brexit. Then he might have a chance of success in a snap General Election with the Conservatives standing as the party of no deal. Or at least he might enjoy success outwith Scotland, but then Boris Johnson cares nothing for Scotland. The feeling is mutual.

The truth is that Boris doesn’t really believe in Britain. He doesn’t really believe in Brexit. He doesn’t even really believe in the Conservative party. His one lodestar, his one true principle, his only guiding light, is an unshakeable belief in his own entitlement. The total conviction that he spoke of is really a total conviction that he is owed the Conservative leadership, and owed the office of Prime Minister. The tousled hair, the bumbling affectations, the Classical quips, they’re all carefully constructed to present an image designed to appeal to a certain type of English voter.

Today the House of Commons played into Boris Johnson’s hands by voting down a proposal to allow the Commons to take control of business and vote against a no deal Brexit. It was described as the last chance to block a no deal Brexit. The Labour motion was supported by all the opposition parties except the DUP, as well as by some diehard Conservative remainers.

However the motion was defeated by 309 votes to 298, because eight Labour MPs defied the whip and voted against their own party. Kevin Barron (Rother Valley), Ronnie Campbell (Blyth Valley), Jim Fitzpatrick (Poplar and Limehouse), Caroline Flint (Don Valley), Stephen Hepburn (Jarrow), Kate Hoey (Vauxhall), John Mann (Bassetlaw), Graham Stringer (Blackley and Broughton). They should hold their heads in shame. Labour was very quick to expel Alistair Campbell for voting for the Lib Dems in the EU elections, Kate Hoey is still a member of the Labour party. If those Labour MPs had voted with their party, the motion would have carried. The last ditch effort to prevent no deal, and it was defeated thanks to Labour MPs.

Scotland is screwed if it stays under Westminster rule. The Tories will ignore us when they’re not actively despising us, and Labour offers as much protection as a wet paper bag in a hurricane. We’re ignored, traduced, lectured to. We are told that we’ll get what we’re given and should jolly well be grateful. Brexit will trash our economy and our prospects, but we’re told to suck it up. Scotland has zero influence on determining its own future, zero influence on determining the path taken by this so-called union. Is this really the best of both worlds that Scotland was promised by Better Together in 2014? Yet it’s only going to get worse.

The only remaining hope for Scotland is for us to become one of those places that is remote and distant from Westminster that Esther McVey thinks is “on a continent … abroad.” We’re already remote and distant from Westminster in terms of having any influence. We may as well have independence too and then at least we can plot our own course instead of sitting passively and silenced while it’s decided by the chancers, charlatans, and choobs of Westminster.

28 comments on “On one of the continents, abroad”