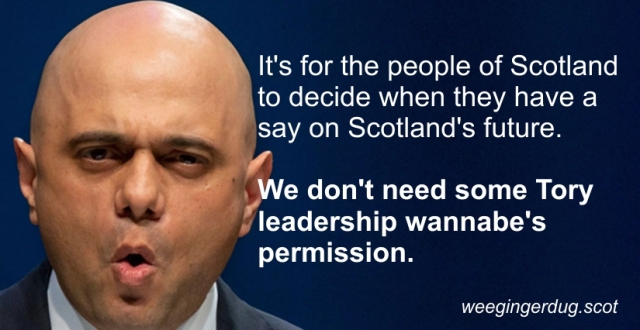 The Scottish Government has published its referendums bill, and as Andrew Tickell points out in The National, it makes for some very interesting reading.

However since it’s always been thought that any legal challenge would go directly to the UK Supreme Court, any legal challenge to an Independence Referendum Act passed by Holyrood would have been dealt with in pretty short order. The Scotland Act contains a provision allowing the UK Government to take objections by UK Government ministers to Acts of the Scottish Parliament directly to the UK Supreme Court, by-passing the Scottish courts.

So it has always been assumed by the anti-independence parties and the British Government that they could fast-track their legal objections to another Scottish independence referendum and have them dealt with immediately in the UK Supreme Court, a court which has a majority of English judges who have shown in the past that they tend to side with the British Government concerning devolved issues. That provision meant that it was considered by many to be more likely than not that an independence referendum without a Section 30 order would be found to be illegal. After all, Scotland would be arguing its case in a court composed mostly of judges schooled in English law who have no sympathy with or understanding of the Scottish doctrine of popular sovereignty.

One notable provision that it establishes is that all UK, EU, and Commonwealth citizens resident in Scotland aged 16 or over will be eligible to vote. It also ensures that the framing of the question will be for the Scottish Parliament to decide, subject to consultation with the Electoral Commission. This reduces the risk of biased interference from a Westminster which would seek to restrict the franchise or pose the question in a way which slants it towards opposition to independence, as Scotland in Union are prone to doing in their opinion polls.

As it is framed, this referendums bill is clearly within the competence of Holyrood and cannot be challenged as dealing with matters reserved to Westminster. The Tories can gnash, wail, complain, and do their pouty thing, but there is nothing in this bill that allows them to challenge it legally. The SNP and the Greens have a clear majority in Holyrood, and this bill is going to pass. There’s nothing Ruth Davidson, Wullie Rennie, or whoever is the leader of Labour in Scotland next week can do to stop it.

That’s a clever piece of legislative sleight of hand, but it’s not the really clever bit. The really clever bit is that having established a general framework for the holding of referendums the bill authorises Scottish ministers to proceed with a referendum subject only to a majority vote in Holyrood. That’s significant because decisions by Scottish ministers which Westminster objects to are not liable to immediate transferral to the UK Supreme Court. Objections to ministerial decisions have to be dealt with by the Scottish courts and make their way through the Scottish legal system.

This bill does not negate the need for a Section 30 order for Scotland to have an independence referendum which can’t be legally challenged by the anti-independence parties, but crucially it makes a legal challenge by the Westminster Government far more difficult. The anti-independence parties can no longer rely upon an immediate referral to the UK Supreme Court, now they will have to go all the way through the Scottish legal process. We saw with the ruling on the revocation of Article 50 that the Scottish courts are less likely to automatically rule in favour of Westminster than the UK Supreme Court is. And just as it did during that particular case, if a Scottish court found against the British Government, it is not impossible that it could refuse to allow the British Government to take the matter further to the UK Supreme Court.

However the really important effect of this bill isn’t legal, it’s political. This bill introduces significant political obstacles for opponents of independence because should a Scottish court rule in favour of the Scottish Government, but the British Government then appeals to the UK Supreme Court, they will be seen to be overruling not just Holyrood but also the Scottish legal system. There will be a political outcry in Scotland should a Scottish court rule in favour of the Scottish Government, only for the British Government to seek to overrule that in a court composed largely of English judges. It raises the important political question of the independence of the Scottish legal system which was supposed to have been guaranteed by the Treaty of Union. Westminster then runs the significant risk of being seen to break the spirit of that Treaty. That won’t play well as opponents of independence seek to persuade Scotland that it’s a valued partner in a family of nations.

Crucially, this bill makes a consultative referendum without a Section 30 order a far more realistic prospect, because if a Scottish court rules that it’s legal, then the anti-independence parties have no principled grounds for boycotting it. The bill has crowbarred open another route to an independence referendum in the teeth of the objections of Tory leadership candidates.

Most importantly of all, this bill establishes the principle that it’s for the people of Scotland and their elected representatives to decide when and if Scotland gets a say on its future. We don’t need Sajid Javid’s or any other Tory’s permission.

53 comments on “The cleverness of the referendum bill”