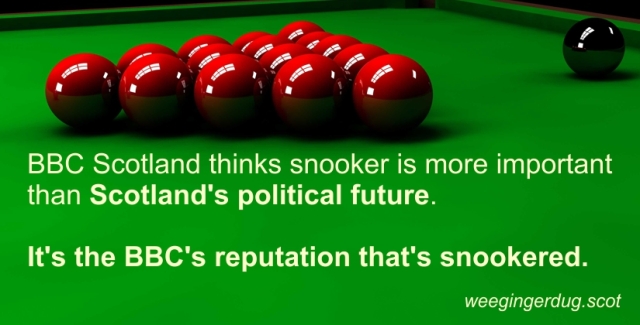 On the weekend of the SNP party conference, The Times newspaper published a poll commissioned from YouGov which shows that even before an official campaign for independence has begun, while we’ve been subjected to a constant barrage of SNPbaddery in the overwhelmingly anti independence media, support for independence continues to rise. When you remove the 10% who don’t know, 49% of the Scottish electorate want independence, 51% are opposed. There’s a 3% margin of error in opinion polls and this result is within that margin, so support for independence is now statistically tied with opposition.

I don’t know if the poll questioned 16 and 17 year olds, who aren’t able to vote in UK elections or European elections but who will be able to vote in a Scottish referendum. If it didn’t then the true support for independence could be even higher.

The poll also confirmed what Scotland in Union’s shooting itself in the foot poll earlier this week showed, that the SNP are set to dominate Scottish elections and will make substantial advances on their current position. It is possible, albeit unlikely, that the SNP could hoover up four of Scotland’s six seats in the European Parliament. The new poll also shows that pro-independence parties are set to increase their showing in the next Scottish Parliamentary elections, and we will end up with an even larger pro-independence majority in Holyrood. Other polls have shown that if there is a snap UK General Election, the SNP is likely to make huge gains at the expense of Labour and the Conservatives. They could pick up as many as 16 seats in Westminster. So much for peak SNP, so much for people being fed up with talk of independence.

Some might say that even though British politics are in a state of near collapse, that we have a British government notable only for its venal ineptidude which is consuming itself with its short term party interests while the future of the UK more uncertain that it has ever been in the post WW2 era, that it’s shocking that support for independence isn’t even higher.

At this juncture I’d comment on the SNP party conference which is taking place in Edinburgh this weekend, but the broadcast media has decided that the conference of the largest political party by far in Scotland isn’t worthy of live coverage. It isn’t being shown live anywhere on that broadcast media that’s so keen to give us wall to wall coverage of the Tory or Labour conferences, constant Brexit vox-pops from leave voting areas, and Nigel bloody Farage. Yet again, the new BBC Scotland channel was put to the political test, and yet again it has failed. On Saturday afternoon it was showing the snooker instead, a snooker contest which is also being broadcast on BBC2. If the BBC thinks snooker is more important than the political future of Scotland, the only thing that’s being snookered is the BBC’s reputation.

One of the biggest reasons why support for independence isn’t higher is because the media in this country sees its role as speaking truth unto power. It’s just that the truth they want to speak is what the British establishment says it is, and the power that they want to speak it unto is the sovereignty of the people of Scotland. They don’t want to ask the British government why it thinks it has the right to deny Scotland a say on its own future even though the Scottish government has a mandate for a referendum. They don’t ask the British government why it can point to its own interpretation of opinion polling to claim that there shouldn’t be a Scottish independence referendum while at the same time ignoring all the opinion polling that shows that most people in the UK want a referendum on the EU. Nowhere will Scotland’s overwhelmingly anti-independence media hold the British government to account for its double standards.

If you want an explanation as to why support for independence isn’t higher, there you have it right there. Even though half the population of Scotland support independence, we still struggle to get our message across via a media that’s hell bent on silencing us when it’s not trying to defame us as anti-English racists or searching desperately for another SNPbad story.

It’s a media which is determined to depict independence as a purely party political issue, and believes that if it can scream about some perceived shortcoming in an issue which is within the remit of a devolved administration headed by the SNP, then that throws the entire question of independence into doubt. It ignores what ought to be an obvious and self-evident truth, that an independent Scotland will be a democracy, and other political parties will be available. It ignores the fact that even though the SNP is by far the biggest and most influential political party pressing for independence, the grassroots movement comprises people of all parties and of none.

Once there is a certain date for a referendum, many more people who are supportive of yes will start to campaign. Many more people who are unsure about the issues will start to investigate them. Those groups which already exist will see a boost in their active membership and will engage in much more activity. Back during the last referendum campaign, the independence movement had to construct itself from the ground up, this time we have a head start. This time we have thousands of activists who are experienced and knowledgeable.

No wonder the British government and the Conservatives are so desperate to prevent a referendum happening. No wonder BBC management is so concerned to ensure that its viewers in Scotland won’t see anything. It’s because opponents of independence have nothing to compare to the grassroots independence movement, and they ain’t seen nothing yet.

23 comments on “They ain’t seen nothing yet”