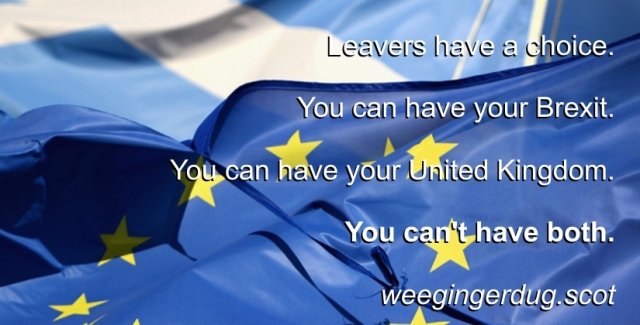 Usually, this blog is written for a readership of Scottish independence supporters, a majority of whom support Scotland remaining within the EU, just as a majority of Scotland’s voters as a whole supported remaining within the EU. This article is different. It’s intended as an open letter to those, both within Scotland and elsewhere in the UK, who voted to leave the EU. The argument made in this article is not a intened as a warning, it’s not meant as a threat. It’s simply a statement of the consequences of what you voted for if you voted for the UK to leave the EU. You’ve also voted to end the United Kingdom.

Those of us in Scotland who voted remain, which is a large majority of the electorate, often hear leavers tell us that the UK voted as one country and so it shall leave as one country. That’s your problem right there. The UK is not one country. It consists of three countries and part of another. The UK is, as we’re always being told by Theresa May and other British nationalists, a precious union. It consists of Scotland, England, Wales, and Northern Ireland. We’re not seeing much evidence of any awareness of that reality from those who are forcing Brexit upon Scotland.

Today, on What Would Have Been Brexit Day But Isn’t, as I watched the pro-Brexit protesters outside Westminster talking about their feelings of betrayal, about how the political class had let them down, about their loss of faith in British democracy, all I could think of was “Welcome to our world”. Because all the ills that you claim the EU inflicts on the UK, the UK has inflicted on Scotland, only ten times worse. You didn’t need to ask the EU for permission to have the referendum, yet Scotland is told it needs permission even to ask itself the question.

In Scotland, the majority of people look on the shambles of Brexit with horror, revulsion, and with growing anger. We hear plenty of talk of respecting the will of the 17.4 million. We hear nothing at all about respecting the views of a Scotland that voted to remain and which voted to remain in the EU by a considerably larger margin than it voted to remain a part of the UK. Scotland is only in this situation to begin with because in the independence referendum campaign of 2014 those who are driving Brexit promised the people of Scotland that they’d listen to us and respect us.

Brexit supporters talk a lot about respecting the will of the people, about how angered they are that politicians in Westminster are not listening to them and not fulfilling the promises they made. Your pleas and cries might have more understanding in Scotland if you had expressed similar outrage when the promises made to Scotland were so casually tossed aside. But you didn’t. The way in which the promises made to Scotland were traduced and contemptuously dismissed by the Conservative party passed unremarked amongst the great majority of Brexit’s supporters. The original project fear was the project fear that Scotland was subjected to in 2014, yet you sat in silence. So you will forgive us if our sympathy for your plight is limited.

Brexit has taught us in Scotland that we get what England votes for. It has taught us that in the eyes of the British establishment, the claim that this is a precious union is a hollow hypocrisy. It has exposed the so called union as a myth. Yet we have seen how that supposedly evil EU, that so-called monolithic bloc, has respected and listened to the concerns of Ireland. There is a nation in these islands which is an equal partner in a family of nations. But it’s not Scotland.

The scales have fallen from the eyes of many people in Scotland who voted against independence in 2014. A series of opinion polls have shown that a majority of the Scottish electorate believe that independence would be better than any form of Brexit. An opinion poll published just today has shown that amongst those undecided on the Scottish constitutional question, Brexit has caused 63% to believe that Brexit makes Scottish independence more likely, and 45% say that Brexit has changed their view on Scottish independence. The United Kingdom was already hanging on a shoogly peg. The shock of Brexit will make it fall.

One way or another, Scotland will have its say on its future. Realistically, if Scotland can only be kept in the UK because a British prime minister with little support in Scotland refuses to allow Scotland to have a vote, then the UK is already dead. However contrary to what you read in the British press, Scotland does not require the permission of a British prime minister in order to ask itself a question about its future. The legality of a consultative referendum under the auspices of Holyrood is yet to be tested in the courts. Remember that the EU referendum which you set such store by was itself a consultative referendum. And there is absolutely nothing to prevent Scotland’s political parties turning the next set of elections in Scotland into an effective referendum on Scotland’s future. We will have our say.

Do not stand in Scotland’s way. Do not force us to participate in your British nationalism. Otherwise you will yourselves to be acting exactly like that EU you claim to despise so much, imposing your will on another country and revealing Brexit as an epic exercise in hypocrisy.

So, to you British nationalists out there, you proponents of Brexit, you Brexiteers, you no-deal advocates, you leavers, I’ll leave you with this: you can have your Brexit, or you can have your United Kingdom. You can’t have both.

59 comments on “An open letter to Brexiteers from Scotland”