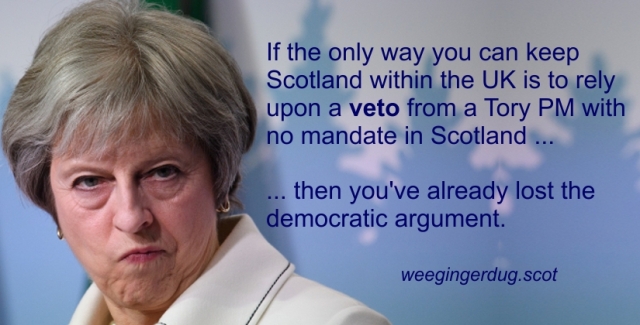 There’s been an outbreak of pearl clutching in the pages of the British nationalist press this week as the realisation dawned that Theresa May’s intransigence won’t save them from another independence referendum after all.

Let’s get something straight right away. There is a concerted attempt by the British press to characterise an independence referendum held under the auspices of a Section 30 order granted by Westminster as the only legal way to hold a referendum. Any other path to a referendum is therefore, they tell us, to be regarded as illegal. This is not true. It doesn’t become true no matter how many times the British press writes about so-called wildcat referendums or about Holyrood “holding a referendum without legal approval”. Whenever you read a newspaper article which refers to a referendum without a Section 30 order as “illegal”, or as being held without “legal approval”, you can instantly dismiss it as having been written by a person with a British nationalist agenda. It is opinion, not fact.

The fact is that a consultative referendum held without a Section 30 order may very well be perfectly legal. The point is that that question has never been tested in the courts and therefore anyone who asserts that it would be illegal is prejudging the issue. There is a very good argument to be made that a consultative referendum would be perfectly legal, since the vote would be advisory and therefore would not impinge upon Westminster’s reserved powers over the constitution. It would merely be a test of Scottish public opinion on the matter given the changed circumstances in which Scotland now finds itself. This is not the United Kingdom that Scotland was promised it could be a part of in 2014.

It would remain for Westminster to decide how to act upon that opinion once it has been ascertained. Holyrood is not therefore intruding upon reserved matters as determined by the Scotland Act. There is absolutely nothing to prevent the Scottish Government testing the legality of a potential consultative referendum in the courts, before it brings such a referendum about. If the court rules that such a referendum would indeed be legal, as many argue, then a consultative referendum can go ahead with legal approval, but without a Section 30 order.

In many ways that scenario would be preferable for the independence movement, because then we go into a referendum in which the British government is simultaneously trying to prevent the people of Scotland from having a say, while at the same time trying to persuade us that Scotland is a valued partner in a family of nations. So valued that they’re trying to gag us. That’s really not a good look if you’re trying to sell the fiction of a union. And make no mistake, the independence movement will make hay with it.

This is in essence the argument that Alex Salmond made to David Cameron in 2012, and Cameron’s advisors were sufficiently persuaded by that argument to see the wisdom in conceding a Section 30 order as a means to maintain the fiction that Westminster was in control of events. David Cameron realised that a Westminster which was seen to be blocking the will of the Scottish people to decide their own future was a Westminster which was putting itself on the back foot in an independence campaign. He realised that it would be impossible to tell the people of Scotland that they were valued and equal partners in a family of nations when the British government was doing its utmost to prevent the people of Scotland have a say on their own future. He was also sufficiently confident, overly confident, that the referendum would produce a substantial majority against independence. The narrowness of the result shocked the British establishment, but not enough to shake them out of their complacency once the desired result had been achieved.

The difference between then and now is that Theresa May doesn’t have the same confidence that another referendum would produce a substantial majority against independence. Theresa May doesn’t want to add being the British Prime Minister who presided over the break up of the UK to her long and inglorious list of political failures. But more than that, we have a Prime Minister who genuinely doesn’t care what Scotland wants, who doesn’t listen to what Scotland says, and who regards Scotland as little more than a glorified English county council. This is a Prime Minister who has such contempt for the democratic will of the people of Scotland that she was able to stand up in the House of Commons and declare that the SNP doesn’t have a mandate for another referendum.

On a visit to Scotland on Thursday, Foreign Secretary Jeremy Rhyming Slang said that “of course” the British government would refuse to agree to a Section 30 order. That’s why, simultaneously with an announcement that it seeks a Section 30 order, the Scottish Government must also start a court case which tests the legality of a consultative referendum. And if that legal case fails, then plans should be developed for a plebiscite election.

Let’s face it. If the only way that you can keep Scotland within the UK is to rely upon a veto from a Conservative Prime Minister who has no electoral mandate in Scotland, and who denies the existence of the political mandate that the Scottish Parliament possesses, then you’ve already lost the democratic argument for Scotland remaining within the UK. You’ve already conceded the point that Scotland is not willingly and freely a part of the UK, because you’re refusing to allow the people of Scotland to have their say on the matter.

Theresa May and her ministers must be taught that there will be a Scottish vote whether they agree or not, and therefore it’s in the interests of the British Government to agree to a Section 30 order as the only means of maintaining the fiction that Scotland really is a part of a union. This Conservative Government of Scotland-deniers is not going to concede freely and willingly that Scotland should have a say on its future. It must be presented with a fait accompli.

110 comments on “The fait accompli”